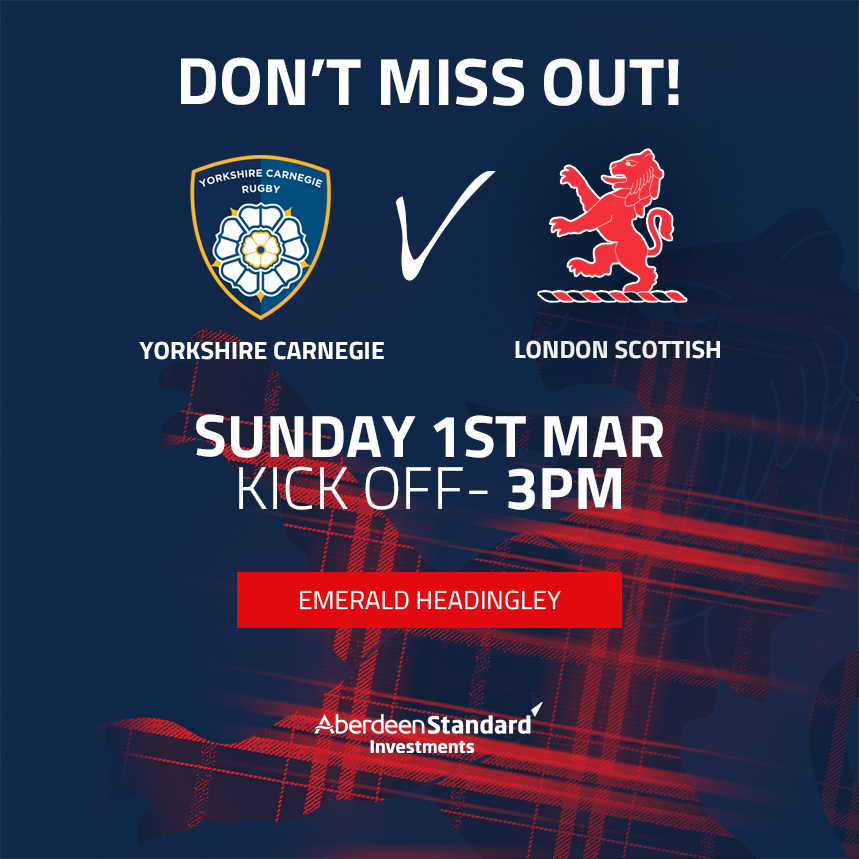 London Scottish travel north to take on Yorkshire Carnegie this weekend in Round 14 of the Greene King IPA Championship, kick off 3pm.

Last time out Scottish suffered defeat at the hands of Newcastle Falcons in a one-sided Cup quarter-final encounter at Kingston Park.

The Exiles however, played an exceptional defensive game blocking several Falcons attacking surges. A further moment of pride for the travelling supporters was a late Matt Eliet try on his 50th appearance for the club. The final score 28-5.

Yorkshire Carnegie currently sit below us in last spot in the League table. We have already faced them three times this season, twice in the Championship Cup and once in the League. The Londoners coming out on top on all occasions.

Last time out Yorkshire Carnegie suffered defeat against Ampthill in a rescheduled match at Headingley, 10-52. They are yet to win a match this season.

With more poor weather forecast for the country this week, especially in the north, you’ll need to wrap up warm. Head over to our website to treat yourself to one of our hoodies or coats.

Next week the team will have time away from the playing field before returning home to take on Hartpury College on Saturday 14th March at the Athletic Ground, kick off 3pm. Tickets and hospitality are selling out fast for this fixture, so make sure you book in advance!

Turnstile Opening Time – Entry is via St Michaels Lane Turnstiles only and these will open at 2pm. Cash turnstiles will be available on match day.

Ticket Office – Leeds Rugby Ticket Office will be open from 1pm on match day for ticket sales and collections.

Ticket Prices – Tickets are priced at £15 for Adults, £10 for Concessions (Senior Citizens 65 & over and students) and Juniors (16 and under) will be free. Tickets for matches will be for general admission and will allow access to sit in the unreserved seating areas in the North Stand (along the side of the pitch – excluding the Directors’ Box seating) or to stand in the Extentia Terrace (behind the posts, undercover). The wheelchair area is in front of the Extentia Terrace behind the posts. Disabled supporters are entitled to a concession priced ticket and a free companion ticket upon production of the necessary disabled and companion ID.

How to buy tickets in advance – Tickets can be purchased online via tickets.yorkshirecarnegie.com , by contacting the ticket office Monday to Friday 9am-5pm or Saturday 9am – 12pm on 0371 423 1315 or in person at Emerald Headingley Stadium, Monday to Saturday 9am-5pm.

Programmes – There will be a free team sheet available on match day from the ticket office and the North Stand concourse bars.

Parking – Limited parking at Emerald Headingley Stadium is first come, first served in Car Park F. This is charged at £5 per car on match day (Blue Badge holders are free).

Food and Drink – There will be food concession unit outside the ticket office which will serve hot food including pies, pasties and peas and the North Stand concourse bar will serve pies and pasties along with hot and cold drinks. The Café Bar food service will no longer be available on match day however there will be a bar open throughout the game serving hot and cold drinks.

We would like to thank you all once again for helping us raise over 14k for Doddie Weir’s chosen charity My Name’5 Doddie Foundation and Tom Smith’s charity 40TUDE.

17 London Scottish cyclists took covering 1,758 miles in total. Thank you to all the support team!

“On behalf of all involved in the Wounded Lions, and Tom and Doddie and their charities, offering a big thank you for London Scottish’s help in making the WL500 challenge such a great success.

Our two main priorities in planning the challenge were to 1.) get all involved in the main ride safely to destination, and 2.) raise the profile of the two charities, the conditions they support and maximise fundraising for 40tude and MN5DF.

In terms of the latter, the parallel events such as your massive efforts at LS were invaluable and have helped us to our current staggering fundraising total of over £143,000.

The way the rugby family gather round to support their own in need has become one of the defining features of this wonderful game. And it was great to ride with you and with so many old pals from Scottish.”