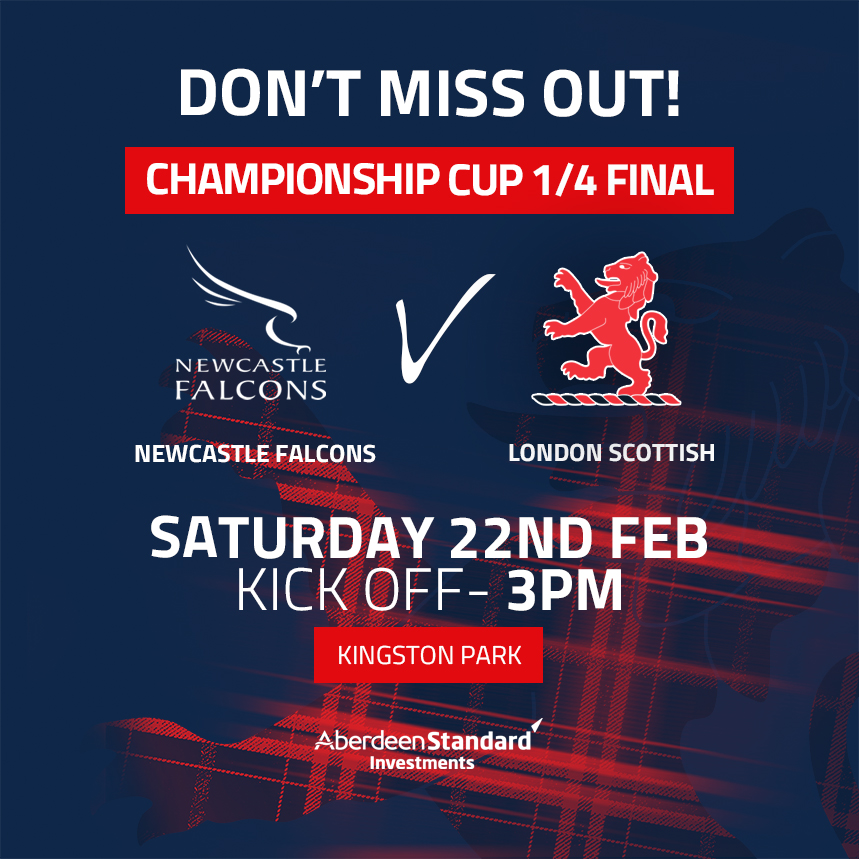 London Scottish travel to Kingston Park this Saturday 22nd, to take on Newcastle Falcons in the knock-out stages of the Championship Cup, kick off 3pm.

After a tight encounter against Ampthill, which ended in another loss for the Exiles last time out under foul weather conditions at Dillingham Park. A win is still eluding Scottish so far this year.

Newcastle Falcons joined us from the Premiership last season and have been the dominant force in the Championship this season currently sitting in top spot having won all their matches.

The Scots first match of the Greene King IPA Championship this season was against the Falcons in October at the Athletic Ground. The Londoners came within touching distance that day 13-17.

Last weekend, the men from Tyne and Wear put in a convincing display against third sitting Cornish Pirates 40-7 in a televised match on Sky at Kingston Park.

For our supporters travelling to the match this weekend please see below all the ticket details:

Adult and concession tickets cost £15, and juniors can come to watch for £8; book in advance and you will avoid a £3 match-day surcharge.

You can book your tickets by clicking here, calling 0871 226 6060 or by visiting the Kingston Park ticket office in person.

This is the first of two trips up North, the second against Yorkshire Carnegie on Sunday 1st March, before a much welcomed break the first week in March. The Scots will then return home to take on Hartpury College on Saturday 14th March.

With yet more rain forecast this weekend get your hands on some of our warm and weatherproof merchandise by heading over to our online store.