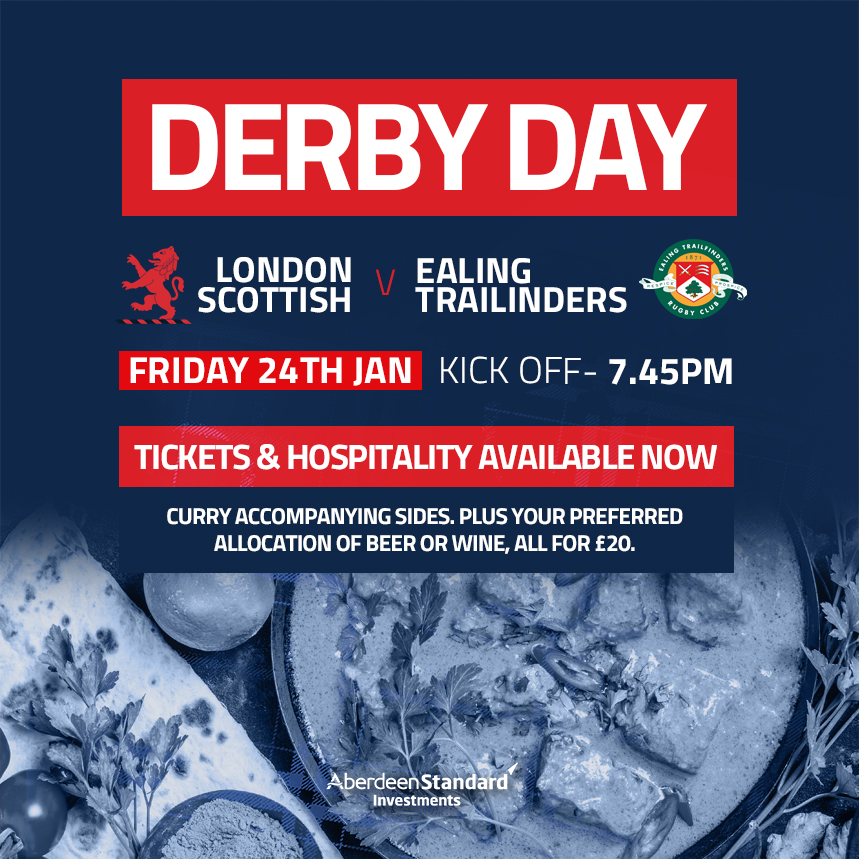 It’s Derby week! This Friday sees us take on local rivals Ealing Trailfinders at home at the RAG – kick off 7:45pm.

At the weekend the Scots come all so close to claiming a win away to Coventry for the first time since 2011, but a last-minute Scott Tolmie try denied the Exiles in a very entertaining game at Butts Park Arena. Ealing came away with a convincing win against Ampthill in an impressive 77-26 display at home.

The two old rivals haven’t yet faced each other this season, with the north west Londoners currently sitting third in the Greene King IPA Championship table, and the Scots in seventh.

Both encounters last season saw the Scots come within touching distance, firstly at home 31-36 at the start of the season. Charlie Ingall scoring a double and current players Ed Hoadely and Billy Harding also going over that day.

In the reverse fixture at the start of last year the Scots were in front at half time 12-14, before a second half triple from Ealing handed them the victory 34-26.

Friday night is our penultimate Curry Night this season, so don’t miss out on a one course meal with all the much-loved extras – including your preferred allocation of beer or wine. To book click HERE! Please arrive at the RAA’s Members’ Bar by 18:30.

Don’t miss out on a great Derby Day and get your tickets booked now by clicking HERE!

It is now 2 years since London Scottish stalwart Mhairi Buckley passed away. To mark Mhairi’s anniversary, two of her friends are raising funds for a memorial bench to be placed at London Scottish’s home ground where she was a regular attendee until moving back to Scotland.

The bench will feature Mhairi’s name and the Rampant Lion. They are looking to raise between £2,000-£2,500 to cover the cost of design, engraving, delivery and installation. If excess funds are raised, they will be donated to Cancer Research UK in Mhairi’s name.

If you would like to donate, please follow the link to the Just Giving CrowdFunding page to see an image of the bench:  https://www.justgiving.com/crowdfunding/mhairisbench

A further charity we are supporting is the Wounded Lions 500 challenge. We caught up with three of the riders involved with the London Scottish cycling team Iain Whyte, Allan Bertie and Melissa Gauthier.

“I am delighted to be a small part of this great event supporting two fabulous charities, both close to my heart.  What both Doddie and Tom are doing for their respective charities is incredible and I am just delighted to be able to show my support and help in this way. London Scottish have rallied behind the event with a good squad of cyclists keen to pedal the first 100 miles with the core team, and the kids setting up a sponsored cycle along the banks of the Thames to support the charities.  Everyone can get involved, whether you cycle one or one-hundred miles”.

“As a proud Scot who has lived in London for 28 years, it is an honour and pleasure to join the London Scottish riders in this great fundraising event.  Doddie has always been an icon in the game and his Foundation is doing great things for MND research.  Tom’s chosen charity of 40Tude is very close to my heart and I have ridden for their cause before. My cycling talent is way in excess of my rugby skills (not hard!); I enjoy a long bike ride, but much prefer the sun to February chills. We will dig deep on the ride and it would be great to see people dig deep into their pockets and donate”.

“I am very happy to join in for part of this bike ride supporting two very important causes. Doddie Weir and Tom Smith are showing amazing courage in the face of great adversity, and I am delighted to be able to show my support and respect for them by cycling and raising money with the London Scottish team.

“Having grown up in French Canada where it was all about ice hockey, I only discovered rugby when my oldest son started playing mini rugby at London Scottish. Both my sons became so passionate about the game that I decided to get involved in coaching 3 years ago. Having never handled a rugby ball before, I thought it would be a good idea to get on the pitch myself, so I started playing touch rugby. First socially and then at a competitive level. I love the ethos of rugby and how inclusive it is. London Scottish One Club joining forces in support of the Wounded Lions 500 is the embodiment of rugby philosophy: everyone coming together, working on and off the pitch for greater good”.

To help us on this challenge get donating on our JustGiving page here: https://www.justgiving.com/crowdfunding/londonscottishwoundedlions500