Club newsletter ahead of Nottingham fixture 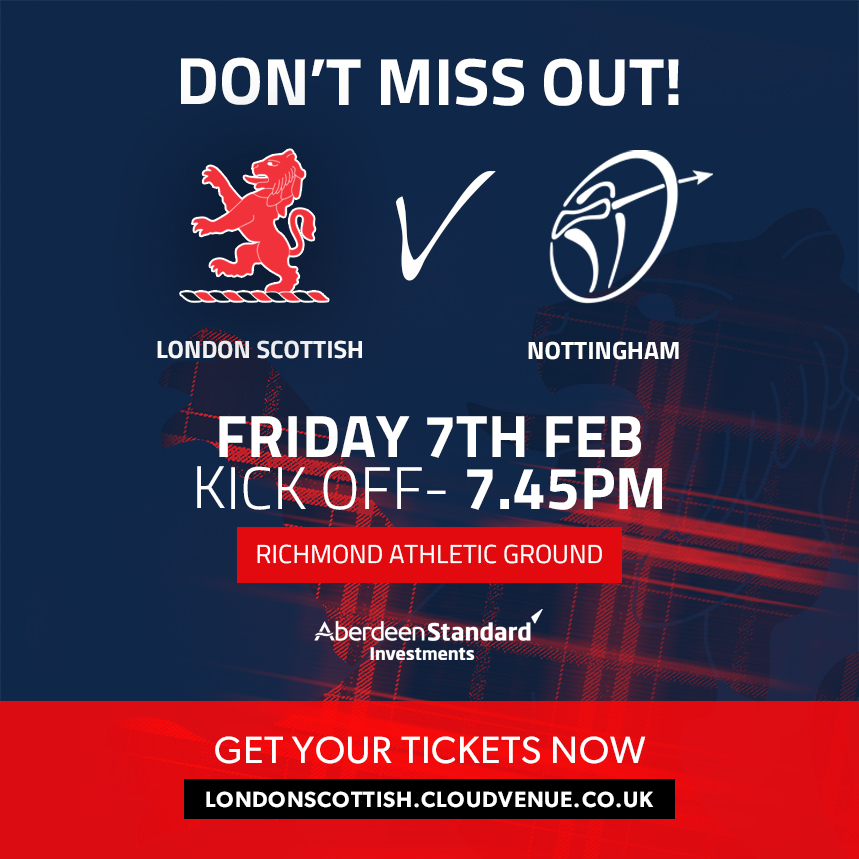 Last time out London Scottish suffered a late defeat to Doncaster Knights at Castle Park 15-13. The result sees them drop down to 11th in the League, having been in 6th at the start of the New Year.

This Friday is our final match under the lights this season. Don’t miss out on our Curry Night, where you will be served a one course meal with everyone’s favourite extras including your preferred allocation of beer or wine. To book click HERE! Please arrive at the RAA’s Members’ Bar by 18:30.

Nottingham are a side that the Scots have faced on several occasions this season. Their first encounter was in a Championship Cup match at the start of the season at the Athletic Ground. Scottish came out on top 22-17; Jonas Mikaclius scored a double and was joined by Luke Hibberd and Alex Toolis on the scoreboard.

An away fixture to the Bay in mid-October ended with Nottingham taking a 17-14 victory. The Scots needed to secure a win in the reverse Championship Cup fixture at the start of December. A win would have secured the Exiles a home quarter-final spot, but it wasn’t to be, the men in Green and White coming out on top 41-5.

The Scots will look to get back to winning ways and retain their winning record at home this season against the team from the Midlands.

A big shout out to all the Minis involved in Saturday’s 5-mile bike ride around Old Deer Park! We would also like to say thank you to cycling club Hot Chillee for their support.

Don’t forget to come down to the RAG this Thursday at 10:15 to cheer on the LS cyclists. They are joining forces with ex-Scotland captain and London Scottish player, Rob Wainwright, at Twickenham Stadium for the start of their 48 hour challenge to deliver the match day ball to Murrayfield for the Calcutta Cup.

This is all in aid to raise money for Doddie Weir’s foundation ‘My Name’5 Doddie’ and Tom Smith’s chosen charity ‘40TUDE’.

The LS team will be joining in on two legs of the challenge, finishing in Northampton.

We would like to thank everyone who has contributed so far to this amazing cause. We have currently raised over £8,000, please help us reach our £10,000 target by donating on our fundraising page HERE!

There’s only one week left until our February Half-Term Multi-Sport Camp where your kids will be kept active and entertained throughout.

The camp will focus on rugby, football, cricket, netball and other muti-directional ball games. With a highly qualified and experienced team of coaches on hand to deliver fun filled sessions there is no better way to spend your school holidays!