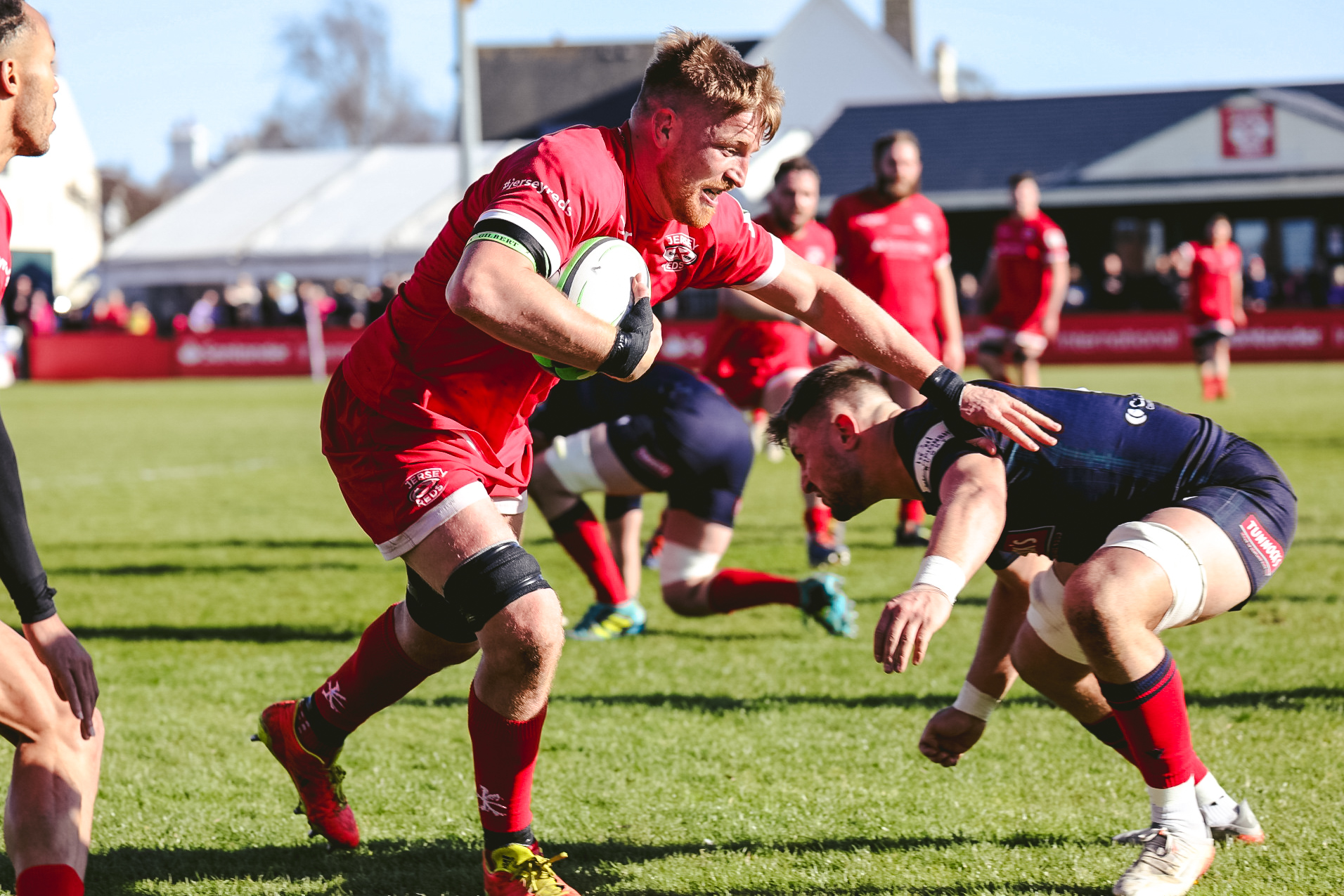 The powerful Jersey rolling maul proved to be the real difference at the Stade Santander International today as the hosts ran out 57-14 winners.

The Exiles have now given themselves an uphill battle in the second leg to qualify for the second round, but there is still hope as there are two spots available for the two ‘best losers.’

The Reds started the game quickly, looking good in attack but the Scottish defence held firm. The first score came after Ryan Olowofela broke down the right-hand side and although he failed to regather his own kick, the Exiles were penalised for being offisde. The hosts kicked to the corner and crashed over through their exceptional rolling maul.

Scottish answered back quickly however. A strong lineout released Jack Ingall and the vice-captain side stepped two Reds before offloading to George Head. The hooker made good meters before being pulled down and recycling the ball well. Harry Sheppard then noticed some space in behind the Jersey defence. His perfectly weighted chip was regathered by Noah Ferdinand who dotted down to make the scores level after 10 minutes.

The rest of the half was a difficult watch for the visitors, as Jersey scored four more tries from the rolling maul. Then on the stroke of the half time whistle, Olowofela intercepted a loose pass and ran it in from the halfway line making the scores at the break, Jersey Reds 38-7 London Scottish.

The Exiles knew they had to make changes at the break and in the second half came out with a plan to stop their opponent’s main weapon. Despite this, they could do little to prevent their opponent’s first score of the second period. Head spotted a potential interception and almost pulled it off. He was inches short from claiming the ball but as it flew past him it deflected forward off a Jersey player’s head. Because it came off the head it wasn’t a knock on and Jersey then regathered and converted a simple 2-on-1 for Olowofela’s second.

Jersey then scored another 10 minutes later before the Exiles were then able to deploy their new tactic to stop the rolling maul. When Jersey set up a rolling maul, Scottish deliberately refused to engage with it and by doing so, there was no offside line, this then allowed a man to come round the side and tackle the ball carrier to ground. It was a tactic that paid off as Scottish stopped three 5m lineouts in quick successsion.

With 10 minutes to play, the Exiles got their much deserved second score after their own maul came up just short. It was recycled well and strong carries from Dan Lewis and Maurice Nwakor brought the Exiles close, before Javiah Pohe managed to crash over despite three Jersey players attempting to bring him down.

Sadly Jersey and Dan Barnes had the final laugh as the former Scot was on the end of a simple overlap to make the fulltime score Jersey Reds 57-14 London Scottish.

Despite the result, Matt Williams was proud of his team’s performance saying “If you take the rolling maul out of the game, it’s a very different score line. We have to give credit to Jersey, they’re one of the best sides in the country when it comes to the maul but once we worked out how to stop it, we were able to match them.

“We’re looking forward to playing them again in two weeks and hopefully we can put in a performance at home that our supporters can be proud of.”

All tickets for the second leg on Saturday 23rd April are just £10. To get yours, click here.