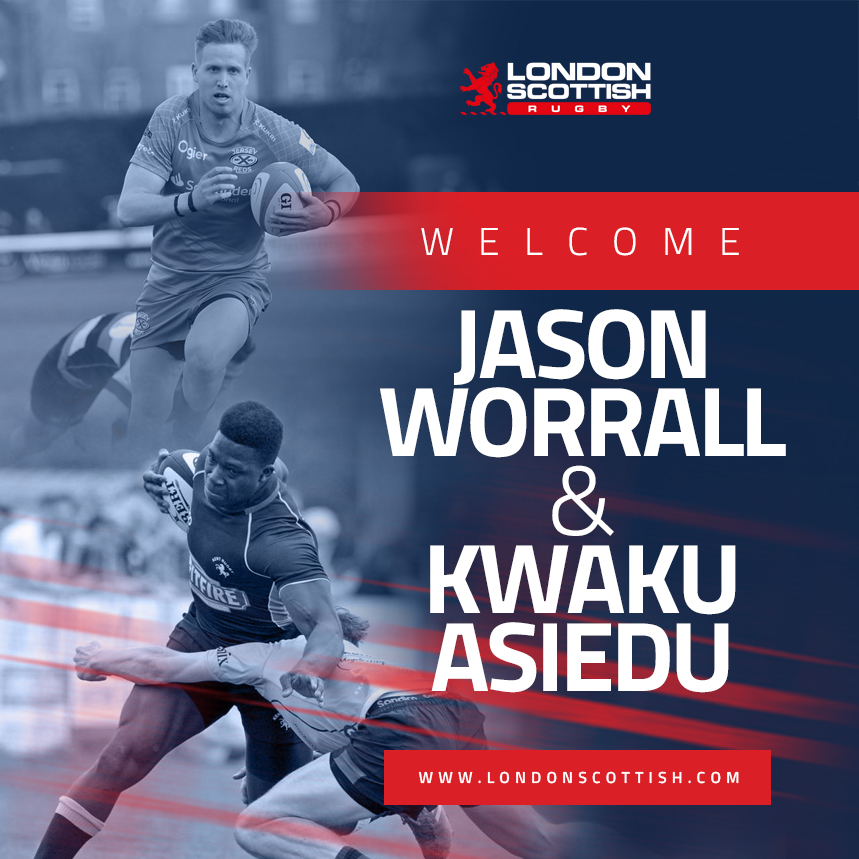 We are delighted to announce the signing of wingers Kwaku Asiedu and Jason Worrall.

Kwaku Asiedu joins us from fellow Championship side Ampthill. His previous clubs include Canterbury, Hartpury Collge, Coventry RFC, Cambridge (season loan whilst at Coventry) and Leicester Tigers Development A League.

The youngster has also played for England Students and England Counties U20.

Away from the rugby field the powerful winger works in sales for an IT company in Tower Hill. When not working you will be able to find him at the gym, listening to podcasts or binge watching a series on TV. He describes himself as a ‘TV geek’.

Originally from Ghana, Kwaku’s name means ‘Wednesday born’. On joining the Scots, Asiedu said: “I am looking forward to playing for London Scottish because I’ve been given the chance to develop myself as a player at a club which is rich in history. It is no secret that the coaching set up here is superb and I look forward to working with Matt Williams and Stevie Scott.

“What Matt accomplished at Chinnor was very impressive and Stevie’s playing, andcoaching career, speaks for itself, so I cannot wait to learn from them both.”

Head coach, Stevie Scott, commented: “I am delighted that he’s signed with us. He has a big future in the game and certainly knows how to score tries. I look forward to him continuing to score tries in a London Scottish jersey.”

Joining Asiedu from Oxfordshire based National 1 side Chinnor, is 26-year old former South African U20s player Jason Worrall. The winger, who was appointed team captain last season, played in all but three of his side’s matches and also finished joint top scorer in the competition with 17 tries alongside fellow team mate Nick Selway last season.

Both players were also named in The Rugby Paper’s National 1 team side of the season.

Prior to the 2019/20 season, Worrall had been with our Greene King IPA Championship rivals Jersey Reds for two seasons (2017-19). He made 33 appearances in a Reds’ shirt and went over the whitewash 11 times.

Away from the rugby field the back is a commercial accountant at CPM in Them. When not working, you’ll be able to find him on a golf course; weather permitting.

On working with Director of Rugby, Matt Williams and Head Coach, Stevie Scott, Worrall said: “I enjoyed working with Matt last year, his success at Chinnor speaks for itself and I believe he can bring that same success to Scottish.

“Stevie Scott’s qualities and experience I’m sure will develop me as a player. I’m excited to be working with him. Together with Matt they can push the Club in the right direction.

“Everyone is chomping at the bit for rugby to re-start. The season will definitely have a different feel about it, but this fresh start could be what rugby needs.”

Head coach, Stevie Scott, commented: “It’s nice to see Jason stepping up to Championship level. He’s definitely been one to follow in National 1 and we look forward to helping him develop heading into the new season.”