London Scottish back to winning ways 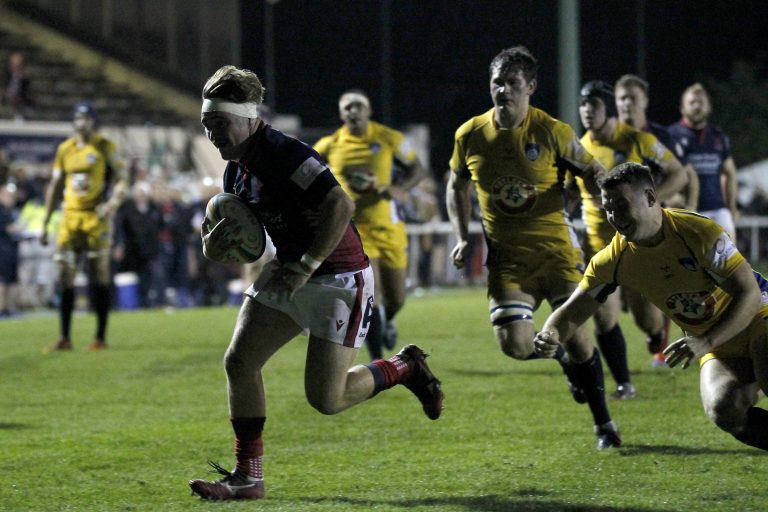 London Scottish claim a bonus point win 30-10 against Yorkshire Carnegie at home at the Athletic Ground in Round 4 of the Greene King IPA Championship.

Matas Jurevicius, James Malcolm, Charlie Ingall and Billy Harding all went over to score for the Scots. A penalty try also was awarded by referee Neil Chivers, with Dan Barnes kicking a penalty.

Yorkshire’s only try scorer was Joseph Morris, with fly half Joe Ford converting and kicking a penalty.

It was the visitors that kicked off proceedings under the Friday night lights. The Scots playing from right to left in the first half.

The home side didn’t have to wait long for their first penalty, Yorkshire were penalised for being offside at the ruck in their own 22. Barnes’ kick went wide of the posts, so the score remained pointless with four minutes of play gone.

Scottish had to wait until the 32nd minute to get the first points of the evening through the boot of Barnes after the visitors were penalised for not rolling away. London Scottish 3-0 Yorkshire Carnegie.

Another penalty to the Scots minutes before the half time whistle would have seen them go in 6-0 up at half time. Barnes’ kick, however, was kicked wide; the score remaining 3-0 at half time.

Yorkshire secured their first points through the boot of Ford three minutes into the second half, Scottish being penalised for being offside.

Having been rewarded with three back to back penalties within Yorkshire’s half, all of which were kicked to the corner, the Exiles ended up setting up a maul off the back of a five-metre line out, at which Yorkshire came in illegally at the side, Chivers ran under the posts to reward the penalty try.

Off the back of a poor line out by Yorkshire in the Scots half, Mark Bright joined forces with captain Lewis Wynne midfield to bring the Scots all the way past their opponent’s 10 metre line. Big carries from the likes of Matt Gordon and James Malcolm followed to bring the home side up to five metres short of the try line.

The Exiles went through the phases for the ball eventually to dribble out of a ruck and fall at Jurevicius’s feet, who reacted quickly to pick up and dive over the try line. The conversion was missed by Barnes. London Scottish 15-3 Yorkshire Carnegie.

Malcolm went over to score his first in a Scottish shirt with twenty minutes to go until full time. Having been awarded a penalty on the halfway line, Yorkshire all offside at the ruck, the Scots set up a rolling maul off the back of a line out only a few metres in their opponent’s 22. Malcolm in control at the back peeled off to score in the far-left hand corner. The extras were missed this time by Will Magie. London Scottish 20-3 Yorkshire Carnegie.

Scottish’s third try came in the 75th minute after the forwards had gone through the phases before the ball went out to the backs. Gordon ran a sublime dummy line to open up space for Ingall to run on to Magie’s flat pass and score in the popular left corner. The conversion was missed by Magie. London Scottish 25-10 Yorkshire Carnegie.

It was a night for the hookers, Harding going over to score with one-minute left on the clock. Having been rewarded with a penalty in their own half, Magie’s kick brought the Scots to a few metres short of the Yorkshire 22 metre line. Off the back of the line out the Scots set up the maul which had worked well all evening. Replacement Charlie Gowling handed the ball out to the backs, and an offload from Gordon put Rob Stevenson into space. The winger then offloaded to Harding. The score at full time London Scottish 30-10 Yorkshire Carnegie.