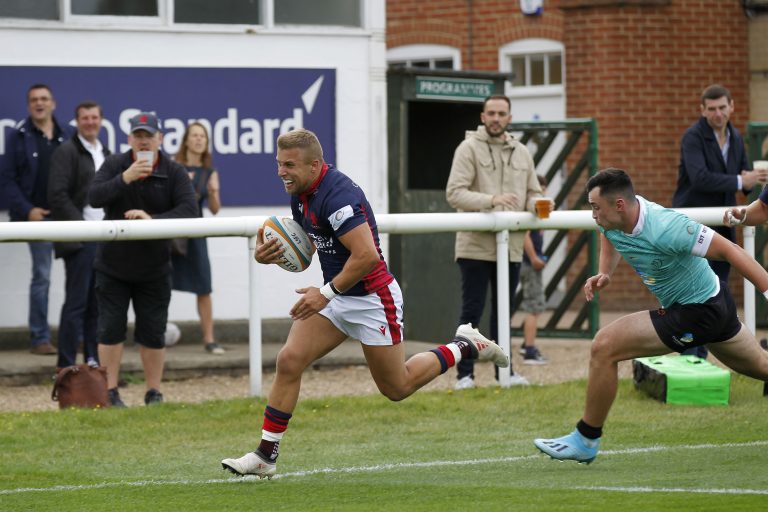 London Scottish run in four tries to beat Nottingham 22-17 in the second round of the Championship Cup at home at the Richmond Athletic Ground.

Luke Hibberd went over to score first for the Exiles, with Jonas Mikalcius running in twice in the first half. Alex Toolis joined them on the scoreboard in the second half.

The blustery weather conditions had an impact on the game straight away when Dan Barnes’ kick to get us underway went straight into touch.

Penalties were exchanged early on, with both sides settling into the game. Nottingham’s first penalty kick was missed by scrum half Dolly with only four minutes on the clock.

A period of dominant play from the Exiles in their opponent’s half, ended with a try being disallowed for a foot in touch.

Not long after Nottingham capitalised on a mistimed pass between Matt Gordon and Elliott Creed. Foley showing good footballing skills by kicking the spilt ball into the Scottish half.

A chase ensued between himself and Barnes. The bounce of the ball favoured Foley, who gathered it to score the first points of the match. Dolly added the extras with 12 minutes of play gone. London Scottish 0-7 Nottingham.

Barnes’ kick went out on the full again at the restart. Nottingham, however, gave a penalty away in the next phase of play off the back of the scrum on the half – way line, referee Craig Maxwell – Keys calling crossing.

Having been camped in their opponent’s half, the Scots patience eventually proved fruitful when Hibberd went over to score on the right wing after showing some lovely footwork to skirt around a couple of Nottingham defenders. The conversion was pushed wide by Barnes, London Scottish 5-7 Nottingham.

With ten minutes left until half time, the Scots found themselves with a line out in Nottingham’s 22. The line out was successful and a rolling maul was set up, the ball eventually finding its way to the backs; Charlie Ingall floated a lovely pass out to Mikalcius, who smashed his was over the try line on the left wing to give Scottish a three-point lead. London Scottish 10-7 Nottingham.

Nottingham were lucky not to lose a player to the sin bin after a high tackle. Barnes’ kick brought the Scots up into the men in green’s 22.

Off the back of the line-out the ball went from the right-hand side of the field all the way out to the left, ending in the hands of Mikalcius again who ran into space on the wing to score his second. The conversion was missed by Barnes. The scores at half time, London Scottish 15-7 Nottingham.

Scottish secured the bonus point only three minutes into the second half when Alex Toolis went over to score on debut. The try, which was set up by the backs down the left wing, ended with Mikalcius offloading into the hands of the Australian to go over and score. The conversion from Barnes was successful. London Scottish 22-7 Nottingham.

Nottingham went on to be the more dominant of the two sides for the rest of the half, scoring a try through captain Luke Peters off the back of Scottish giving away a penalty for a high tackle. The conversion by Dolly brought the scores to London Scottish 22-14 Nottingham, with 20 minutes of play remaining.

Both sides exchanged penalty kicks which were missed. However, it was Nottingham that had the final say in the match when Stephenson’s penalty kick went over. The score at Richmond Athletic Ground at the final whistle; London Scottish 22-17 Nottingham.

We welcome Yorkshire Carnegie to the RAG on Friday 4th, October, kick off 7:45pm.