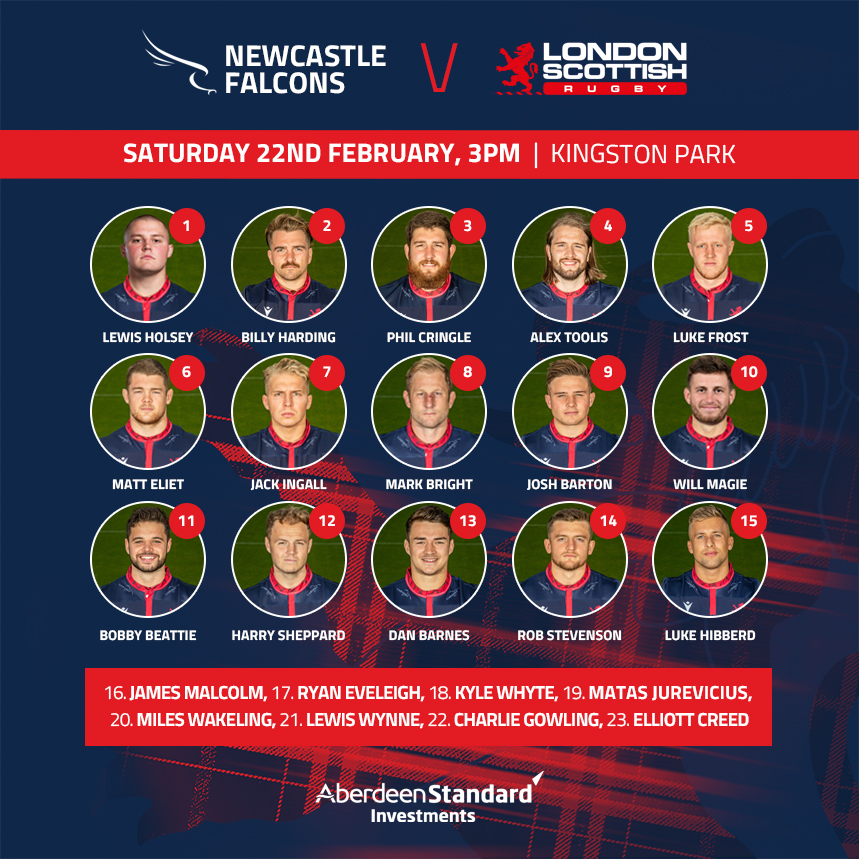 London Scottish have made several changes to their line up for tomorrow’s clash against Newcastle Falcons in the knock-out stages of the Cup at Kingston Park, kick-off 3pm.

After a disappointing loss last time out to Ampthill, there are four changes up front and three changes in the back division in a reshuffling of the starting XV.

Billy Harding has recovered from concussion to start at hooker, James Malcolm drops to the bench, Phil Cringle starts at tight-head prop ahead of Kyle Whyte, Jack Ingall comes in at open-side flanker for captain Lewis Wynne, and Mark Bright takes over at number 8 to captain the side.

Luke Frost moves into the second row to pack down with Alex Toolis and Matt Eliet takes over from Frost at blind-side flanker to make his 50th appearance in a London Scottish shirt.

“Eliet brings a lot of heart and a lot of physicality and energy to the game. He’s one of those players that will never give up. He’s a great player and for him to reach 50 caps is excellent. He’s been a massive credit to the club and every time he’s appeared in a Scottish jersey he’s given his all,” said captain Lewis Wynne.

In the backs Josh Barton returns at scrum-half to partner up with Will Magie, who retains his starting spot at 10. Harry Sheppard replaces Matt Gordon at inside centre, Gordon dropping out of the match day squad. Dan Barnes moves to outside centre and Bobby Beattie moves to the left wing.

Miles Wakeling, Charlie Gowling and Elliott Creed, who returns from injury, come on to the replacements’ bench and will be looking to make an impact alongside Matas Jurevicius and Ryan Eveleigh.

The Exiles have already faced the Falcons in the opening weekend of League fixtures back in October; a fixture in which the men from the North came out on top with a 13-17 win.

“This time around we are playing on a 3G pitch and I reckon it will be a much quicker game. We gave them a good run at the start of the season which is credit to the boys here. Falcons have had an unreal season and they’re a good squad with a big physical pack, so it could be a really fast physical game. We’re really looking forward to it.

“We need to front up against them better. In the match in October we tried to stop their mauling game, their forwards and it worked in our favour. Obviously, the conditions were a wee bit rubbish, but we just need to match them upfront,” commented Wynne.