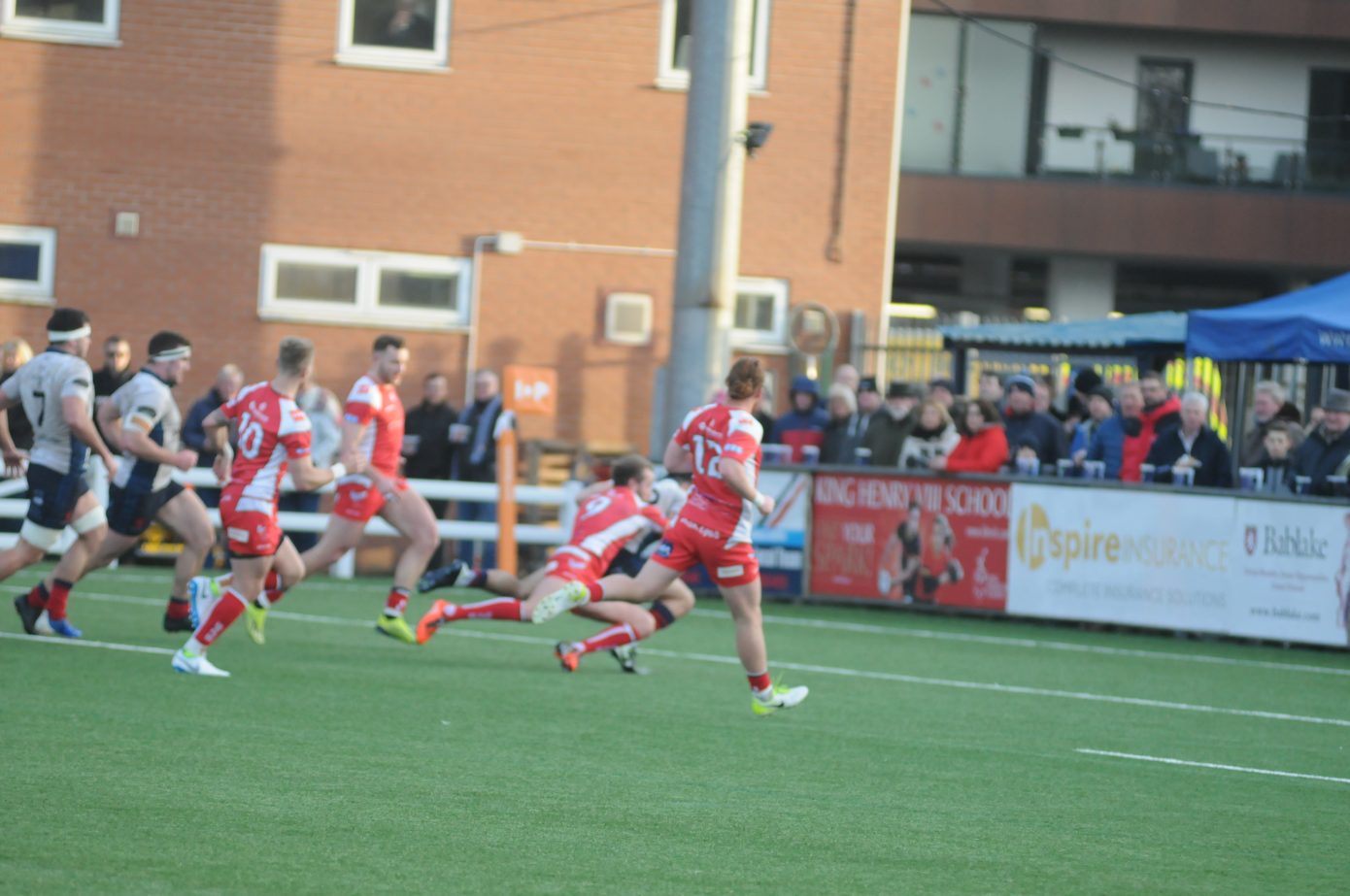 London Scottish suffer a last gasp defeat away to Coventry 36-30 in a tight encounter at Butts Park Arena.

Scott Tolmie went over twice and was joined on the score board by Alex Trimble, James Voss and Peter Whyte for Coventry. Rory Jennings converted three tries and one penalty, with Will Maisey slotting one conversion.

It was the visitors who kicked off proceedings through the boot of Sheppard, Scottish playing from left to right in the first half. The Londoners got out of the blocks the quickest when Rob Stevenson made a break down the right wing and brought the Scots to 20 metres out before offloading to Beattie, who came to ground five metres short.

Strong carries from the forwards brought the Scots up to the try line. Coventry were penalised for a high tackle right in front of the posts. Scottish took the points through the boot of Sheppard. The score with three minutes on the clock; Coventry 0-3 London Scottish.

Five minutes later the Scots were penalised for being off their feet at a ruck just within their own 22. Jennings brought his side level; Coventry 3-3 London Scottish.

Before the restart Stevenson departed the field for an HIA, so Ollie Allsopp came on to make his Championship debut on the right wing.

The Scots would go on to dominate the rest of the half. Their first try came off the back of the quick speed of their defensive line on the halfway line. A Barnes’ tackle on fly-half Anthony Fenner dislodged the ball. Will Magie, who was on for an injured Jonas Mikalcius, kicked the ball up field and a pursuit ensued.

Trimble was unable to land on the ball and knocked it back on to his team’s own try line. Beattie showed his pace to capitalise on Coventry’s mistake and tapped the ball down for a very entertaining try. Sheppard’s conversion came off the left upright and ricocheted back the wrong way; Coventry 10-8 London Scottish.

With 13 minutes left to go in the first half the Exiles were handed a penalty just within their opponent’s half. Sheppard’s kick brought the Scots into the home side’s 22. Alex Toolis claimed line out ball and Wynne passed to Barnes, who ran a lovely line to cut through Coventry’s defence and go over to score from 20 metres out. Sheppard converted; Coventry 10-15 London Scottish.

Just before the half time whistle the Scots set up a rolling maul, which was brought down illegally by Coventry five metres out from their try line. The ball went into the corner again. The rolling maul this time went over the try line and captain Wynne came up triumphantly. Sheppard’s conversion handed the Exiles a 10-22 lead at half time.

Five minutes into the second half Coventry were penalised for being offside five metres from their own try line. The Scots pointed to the posts and Sheppard landed the three points; Coventry 10-25 London Scottish.

At the restart Coventry kicked the ball straight in to touch, but then received the penalty at the scrum on the halfway line. They went through the phases off the back of a line out within the Scots 22, before Tolmie went in under the posts. Jennings converted; Coventry 17-25 London Scottish.

With less than 20 minutes of the game left Coventry’s replacement scrum-half White gathered the ball off the back of a scrum on the half way line and broke up the middle of the field before offloading to  Forsyth 22 metres out, who went to ground five metres short of the try line. Nayalo Senitki got quick ball to Voss who scored. Jennings’ conversion brought the home side to within one point of the Exiles; Coventry 24-25 London Scottish.

White’s try came off the back of a Senitki offload on the Scots 22 metre line. Jennings missed the conversion; Coventry 29-25 London Scottish.

Scottish weren’t going to go down without a fight and two minutes before the full-time whistle Bright went over in the corner off the back of a pop pass from Wynne. Sheppard missed the conversion; Coventry 29-30 London Scottish.

In the dying moments of the game the ball seemed to have been knocked on by Coventry five metres out, but the referee deemed the ball to have gone backwards and Tolmie would eventually go over to score. Maisey landed the conversion to hand his side the win; Coventry 36-30 London Scottish.

A much-improved performance by the Exiles sets up a much-anticipated derby against Ealing Trailfinders at home on Friday, January 24th.