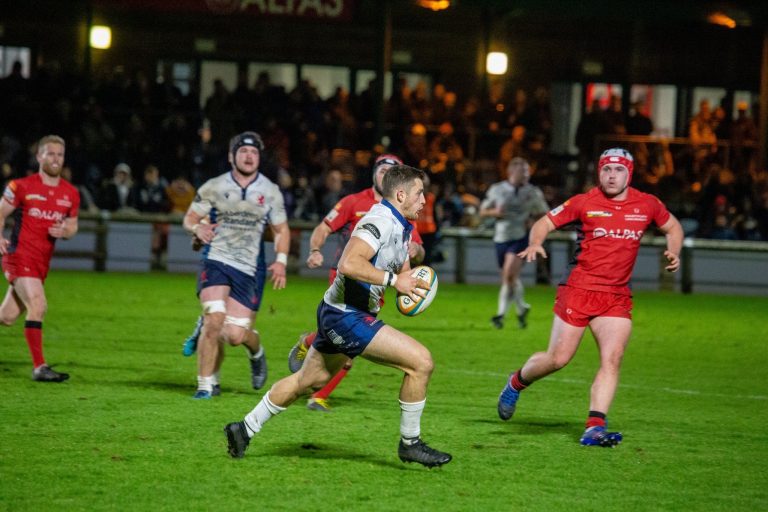 London Scottish came away empty handed from their second fixture on the road away to Hartpury 44-17 at The Gillman’s Ground.

The Scots’ tries came through Luke Frost, who scored a double, and Luke Hibberd, with Will Magie slotting one conversion.

Hartpury ran in six tries through Daniel Murphy, Jacob Morris, James Powell, Joseph Batley, Christopher Eden and George Simpson, with Josh Bragman slotting three conversions plus one penalty and Eden converting his own try and Simpson’s plus a penalty.

Scottish have never won away at Hartpury in the three years that the Gloucestershire based side have been in the Championship.

It was the home side that got off to the quicker start, scoring a try only three minutes in when their pack went over to score from five metres out, Murphy coming up from the bottom of the pile to claim the try. Bragman slotted the extras, Hartpury 7-0 London Scottish.

The Scots replied not long after when Charlie Ingall made a break and offloaded the ball to Hibberd down the left wing to bring the Scots all the way up to their opponents try line. The forwards went through the phases and Frost eventually went over to score in the left corner. Magie failed to add the extras, Hartpury 7-5 London Scottish.

Both sides shared penalty advantages in the lead up to Hartpury’s second try, winger Morris using his pace to go over to score in the far-right hand corner. Bragman kicked the conversion, Hartpury 14-5 London Scottish.

With only ten minutes left until half time, Hartpury went over to score their third of the evening when Powell fended off Jonny Harris’s tackle to go over and score from 20 metres out. The extras were again added by Bragman, Hartpury 21-5 London Scottish.

Hibbered, always dangerous from five metres out, went over two minutes before half time to bring the Scots up into double figures. Magie failed to add the extras. The score at half time Hartpury 21-10 London Scottish.

With the clock already in the red, the Exiles gave away a penalty before the half time whistle. Bragman landed the kick to stretch the score to 24-10 at half time.

Ten minutes into the second half, Hartpury went over to score their fourth of the evening. The home side set up the rolling maul off the back of a five-metre line out, the ball going to ground and Batley muscling his way over the try line. Bragman failed to land the extras, Hartpury 29-10 London Scottish.

Not long after Scottish rang the changes when Josh Barton came on for Charlie Gowling at scrum half, Joe Luca Smith replaced Elliot Creed and Billy Harding came on for James Malcolm at hooker, Mark Bright came off with Matt Eliet moving to 8 and James Tyas taking over at openside flanker, Phil Cringle came on for Kyle Whyte at prop.

Scottish started to ramp up possession and territory and eventually came away with a try. The forwards went through the phases camped on their opponents’ try line, before Frost claimed his second of the evening. Magie added the extras, Hartpury 29-17 London Scottish.

With ten minutes to go Eden caught the Scottish defence napping to score Hartpury’s penultimate try, which he converted. Then, with one-minute left on the clock, Simpson went over to score from five metres out. The score at the full-time whistle Hartpury 44-17 London Scottish.