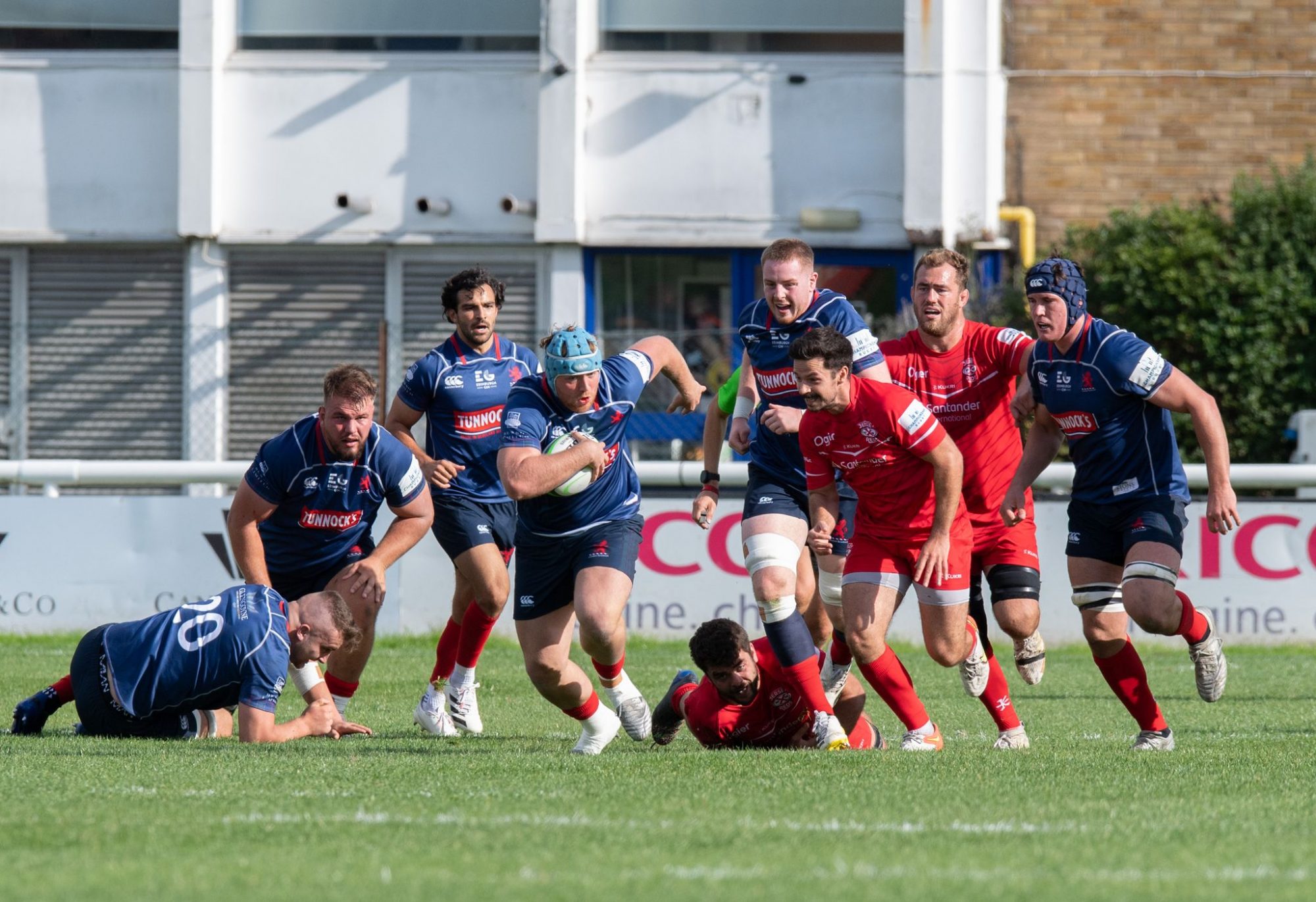 Jersey travelled to West London as the heavy favourites having one their first two matches with a bonus points and sitting top of the league. However, the game began with London Scottish and Jersey Reds looking relatively equally matched for the first ten minutes. Jersey were the side to open the scoring with a try Eoghan Clarke off  the back of a well worked driving maul, which was converted by Russell Bennett.

The pressure kept piling on against London Scottish as Jersey found their way in the game, injuries to Joe Rees and Elliot Chilvers for the Exiles put even further strain on the home side’s pack. Rees continued on for a time but eventually succumbed to a neck injury. Excellent defence from London Scottish prevented Jersey from adding to the scoreline with Matt Wilkinson working well to hold up another surge from the Jersey pack over the line.

This was shortly followed by an excellent interception from London Scottish which prevented another try, however, eventually Jersey’s efforts paid off as they scored a second try in the 28th minutes by Alun Lawrence. Bennett could not convert on this occasion.

As the first half of the match was drawing to a close and it looked as though London Scottish would leave with nothing to show for their efforts. However, a try in the dying seconds from Ed Hoadley gave the exiles hope going into the half time break with the score at 7-12.

At the break London Scottish had soaked up a lot of pressure but found themselves right in the game against the fully proffesional side. However, that first half would take its toll and have a big impact on the second.

Jersey came out of the sheds much the quicker of the two sides with a rapid score from James Elliot after just 41 minutes. What followed in the second half was a clear show of domination from Jersey, with London Scottish faltering under the pressure and struggling to maintain composure in their 22.

Will Brown completed a second half hattrick inside 5 minutes which put an end to this match as a genuine contest. London Scottish’s woes got even worse when Brian Tuilagi saw yellow for a tip tackle with ten minutes to go.

However, with some substitutes bringing fresh legs onto the pitch, London Scottish managed one final push of momentum to score two tried within the dying minutes of the game. First from Robbie McCallum who got on the end of a lovely Zach Clow break. Clow himself then took a quick line out with the clock running out to catch the Reds napping and score the Exiles third try.

Bryan Redpath noted his sides youth in a post match interview but stressed the pressure across the full eighty minutes is what did for his side. He said “we absorbed a lot of pressure in the first half and that took its toll. Then in the second half we fell into one or two errors which cost us big time”.

Director of Rugby Bryan Redpath stressed that this young squad is still building and were without a number of key individuals for this fixture. However, noted that “we absorbed a lot of pressure in the first half and that took its toll. Then in the second half we fell into one or two errors which cost us big time”.

Next up for the Exiles it is a crucial game against Ampthill on the road. Before welcoming Coventry to the RAG on the 8th October. You can purchase tickets for that fixture here.