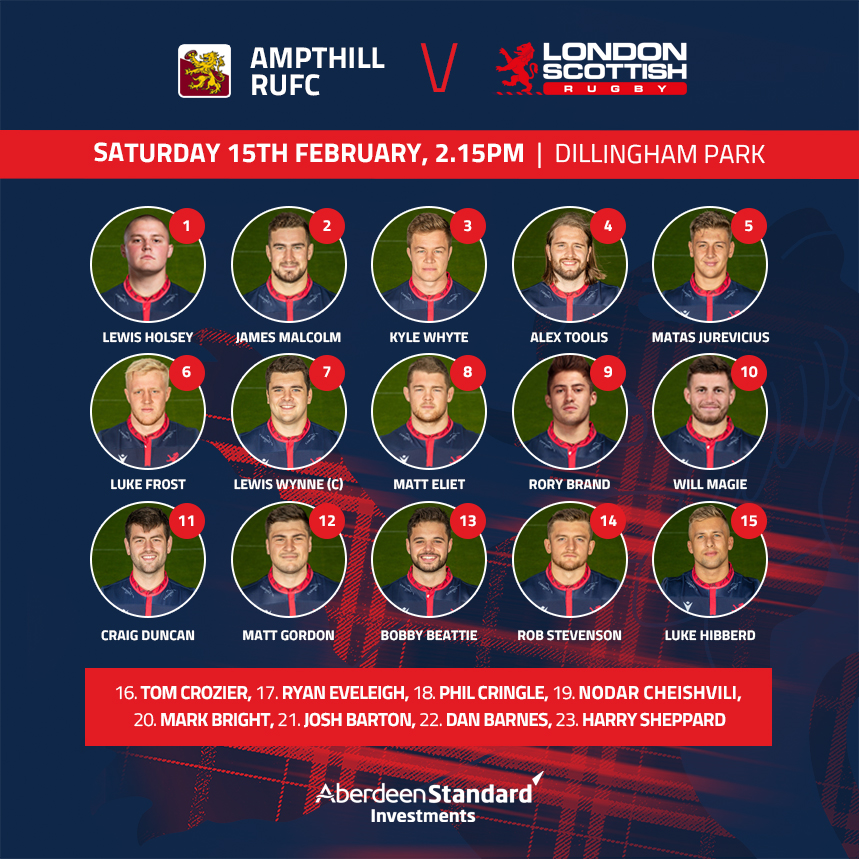 London Scottish have made six changes to the starting XV ahead of tomorrow’s encounter against Ampthill RUFC at Dillingham Park, kick off 2:15 pm.

James Malcolm replaces Billy Harding at hooker, who drops out of the match day squad through concussion, and Matt Eliet, who takes over from Mark Bright at number 8, are the only changes to the forward pack.

Will Magie takes over from Harry Sheppard at fly-half to form a new mid-field pairing with Rory Brand at scrum-half. Bobby Beattie recovers from concussion to start at outside-centre alongside Matt Gordon at inside-centre, who takes over from Dan Barnes who drops to the bench. The final change comes on the left wing, Craig Duncan also returning.

On the replacements’ bench hooker Tom Crozier comes in on loan from Ealing Trailfinders, whilst Nodar Cheishvili returns, having been on international duty with Georgia. Josh Barton comes in for Ed Hoadley as replacement scrum-half.

The training week was interrupted by the news of the halving of funding from the RFU to the Championship. On training and how the news has impacted on the preparations for this weekend’s game, forwards’ coach Stevie Scot said:

“Training has been going well. It was obviously a difficult day on Thursday coming in off the back of the disappointing news from the RFU. The players have responded extremely well to that, there’s a good buzz around camp and the boys are looking forward to having another opportunity to improve on last week’s performance.

“We still all love the game for what it is. I think the big thing is obviously the jobs which are now going to be affected and it’s quite concerning for all involved. The bottom line is the players all play because of their love for the game and that is what we’ve been reminding ourselves.”

Off the back of storm Ciara last week, storm Dennis is set to move in at the weekend, bringing more high winds and atrocious playing conditions: “We asked the heavens to open on Thursday to be able to be prepared for the expected bad weather conditions on Saturday.

The wind wasn’t there, but we’ve trained through some really wet conditions and the skill level was good, so the boys have been able to take some confidence from that. That will hopefully make us more prepared for any adjustments to our game plan on the day.”

Having only come away with a draw in the reverse fixture at the end of last year, the Scots will be looking to exceed that result with a win. “Ampthill are a good side and they’ve won a few big games and have some good experienced heads throughout the team with a lot of ex-Premiership players, which helps at this level.”

“The team will certainly have an edge about them this weekend playing against a team who are in the same situation as us. It’s not like it’s just affected us, it’s affected the whole competition.

“It’s going to be hard weekend for Championship rugby, but we, and everyone else, play for the love of the game and as soon as that whistle goes it’s all about putting everything that has happened this week behind us and playing that full 80 minutes.”