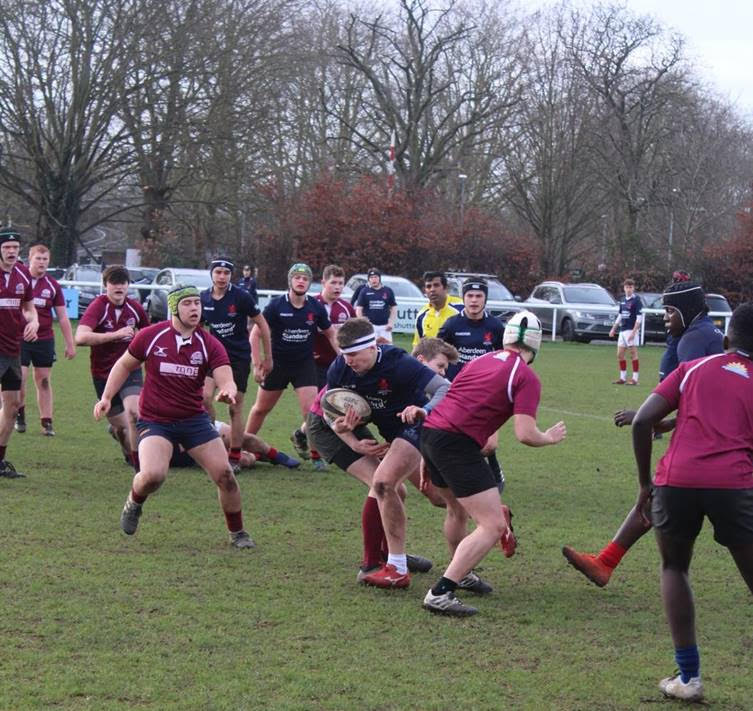 London Scottish U18’s, sponsored by Friends of Scottish Rugby, played Hitchin on Sunday, with markedly better conditions than last season when the Scots managed a tight win away between the sleet and the snow showers somewhere North of Watford.

The Scots received the kick-off and immediately worked their way steadily upfield in a series of sensible plays before earning a lineout on Hitchins 22m. After going close on the shortside the Scots switched back before Thomas had a pick and go and crashed over for the first score. Following the restart it was Cameron who found a gap, and, with some elusive running, took us 20 metres up field and into their half before Hitchin earned a lineout. Hitchin then started pressuring the Scots and a couple of deep kicks just had the legs to roll into the in-goal area where Ted calmly touched down inches ahead of the opposition. From the second 22 drop out Max put in an imperious kick to take us back to their 10m line, albeit for a Hitchin lineout. Hitchin worked the ball out wide but were held up in the tackle, the Scots winning the maul to gain the following scrum. The Scots made good use of the possession and had some superb handling and support to take us deep into their 22 with some Fijian like offloads. Sadly a pass went down handing the scrum to Hitchin but it was a sign of the confidence the Scots were showing in their ability early on.

Hitchin were next to score though, and in a few quick moves put the hands through the backs to score out wide on the left. With a conversion form the touchline the score was 5-7. Play bobbled around the midfield as Hitchin took it to our 10m, then the Scots earned a lineout on half way before Ben crashed through the heart of their defence to take us close to their line. Patient phases later and the ball was shipped to Kyrill who went over on the wing. Max added the extras from touch and the score was 12-7. No further scores before half time left the game evenly balanced for the second half.

The next score was a good one with Ben breaking form the back of a scrum on half way, feeding to Finn S who spotted a gap, broke the first line of defence before handing back to Ben to make the final 20 metres and go over under the posts. 19-7 after Max added the extras and the Scots looked like they would start to stretch away. Hitchin had other ideas and put a good kick into the corner giving the Scots a 5m lineout. The Scots dealt with it well and cleared to touch, then put in further phases to earn a lineout on their 5m. The driving maul didn’t work, but Finn C went in from the second phase to score in the corner, 24-7.

Hitchin came back and caused some issue with the Scottish defence on our line, drawing the Scots offside. A clever kick across field from Hitchin then released their winger for a two on one and eventually a try in the corner. Hitchins kicker was again on form from out wide and took the score to 24-14. The Scots weren’t done though and soon had the ball back in the Hitchin 22m. One phase looked like a great  try was scored as Finn S passed to Ben who offloaded to Adam to go over in the corner, however the ref called a forward pass and back we came. It didn’t matter much as shortly after Jackson went over, taking the score out to 29-14. The game closed out with Thomas again running one in from close quarters and Max gaining the conversion with the final kick of the match to make the final score 36-14 and Scottish worthy winners against their Division one opponents.

Full credit to both teams, it was a great game to watch and made more entertaining because both sides tried to make best use of all 15 players on the field. We wish Hitchin well for the rest of the season.