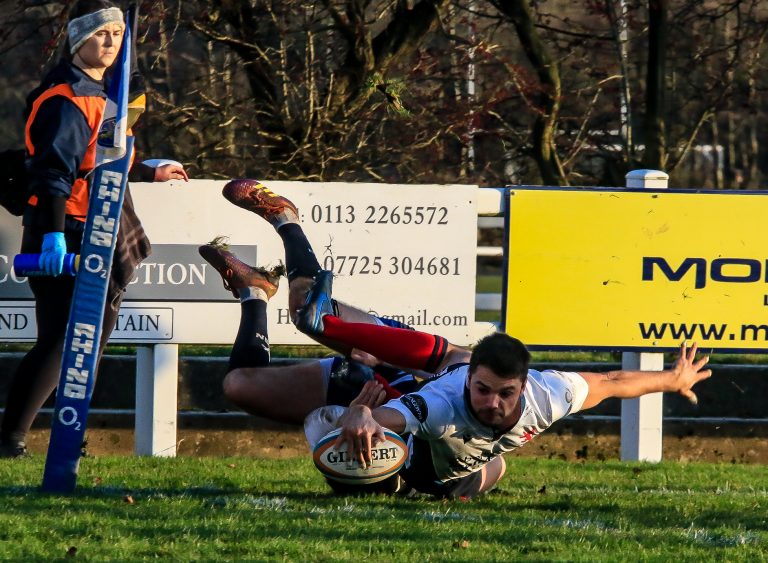 The Scots secured themselves a quarter final spot in the Championship Cup with an emphatic win against Yorkshire Carnegie 14-53 in a try fest away at West Park Leeds RUFC.

Matt Gordon, Bobby Beattie and Rob Stevenson all went over twice each for the Exiles, with Matt Eliet, Joe Luca Smith and Mark Bright joining in on the scoring antics.

Yorkshire’s points came through outside centre Lee Smith and a penalty try in the second half.

It was the home side that kicked off proceedings on a bright, but chilly day in West Yorkshire. The visitors played from right to left in the first half.

However, it was the Scots that scored the first points of the afternoon through Gordon six minutes in. Having been rewarded a penalty, Yorkshire penalised for a side entry at a maul 22 metres out from their own try line, fly half Will Magie’s kick brought the visitors to five metres out.

A rolling maul was set up off the back of the line out, with the backs joining to drive the pack over the whitewash. Gordon came up last from the pile of exuberant bodies. Magie failed to land the extras; Yorkshire Carnegie 0-5 London Scottish.

Six minutes later, off the back of a another rolling maul twenty metres out, scrum half Josh Barton passed the ball out to Beattie, who threw a dummy pass which created a gap for him to go over and score.  The conversion was missed by Magie; Yorkshire Carnegie 0-10 London Scottish.

The Scots’ third was orchestrated thanks to a break from Gordon within his own 22, which brought his side to within 22 metres out. The outside centre had support on both sides when he put boot to ball: Barton, Beattie and Eliet put Yorkshire Carnegie’s left-wing Jordan Howden under immense pressure.

Howden’s kick got charged down by Eliet, who gathered the ball to go over and score the Scots third try only fourteen minutes in. Magie’s conversion brought the score to Yorkshire Carnegie 0-17 London Scottish.

With 20 minutes still left of the first half, the Scots secured the bonus point when Stevenson put on the afterburners to go over in the visitors’ lucky try scoring right corner. The try scorers weren’t making the kicking angle for Magie very easy. The conversion was missed by the fly half; Yorkshire Carnegie 0-22 London Scottish.

Fast passed running rugby from the Scots created the man advantage out wide for Smith to scoot around the final defender in the Yorkshire Carnegie line, to go over and score in the right corner. Magie added the extras to bring the score to, Yorkshire Carnegie 0-29 London Scottish at half time.

Two changes were made to the Scots XV at half time, with Harry Sheppard coming on for Magie and Jonas Mikalcius replacing Luke Hibberd on the left wing.

It was the home side that scored the first points of the second half, when Lawson intercepted a pass from Sheppard 22 metres out from the Scots’ try line. Full back Ryan Shaw landed the conversion; Yorkshire Carnegie 7-29 London Scottish.

Ten minutes into the second half, Beattie went over to score his second. Off the back of a Scottish scrum 22 metres out in the middle of the pitch, the ball was picked up from Barton from the base and was passed out to Gordon who chipped the ball on. Mikalcius gathered the ball five metres out and offloaded to Beattie. Sheppard’s conversion unfortunately bounced the wrong way off the left upright; Yorkshire Carnegie 7-34 London Scottish.

Three minutes later Bright broke through the Yorkshire Carnegie defence from ten metres out to bring the Scots to within 22 metres. The number eight offloaded to Barton, who was cut down a few metres short of the try line, but managed to offload the ball back to Bright who scored. Sheppard converted; Yorkshire Carnegie 7-41 London Scottish.

Yorkshire Carnegie got their second score on the board through a penalty try, when Mikalcius was penalised and shown yellow for a deliberate knock on five metres out from the Scottish try line. Yorkshire Carnegie 14-34 London Scottish.

Despite being a man down, the Scots went on to score two more tries with eighteen minutes left until the full-time whistle.

Stevenson’s second try was described by tight-head prop Kyle Whyte, who had been replaced by Phil Cringle, ‘He cut through the Yorkshire defence like a hot knife through butter’. The conversion was missed by Sheppard; Yorkshire Carnegie 14-46 London Scottish.

Gordon showed some fantastic footballing skills to not only put in a chip over the Yorkshire Carnegie defence on the half-way line, but also then to go on and kick the ball on twice to eventually pick up and go over and score himself, showcasing why he’s earnt the nickname “Flash Gordon”. Sheppard landed the conversion to bring the score to Yorkshire Carnegie 14-53 London Scottish at the full-time whistle.

The Scots will have to wait until their match next weekend against Nottingham away at the Lady Bay (Sunday 8th, kick off 3pm) to see if they will be hosting a quarter final match at home.