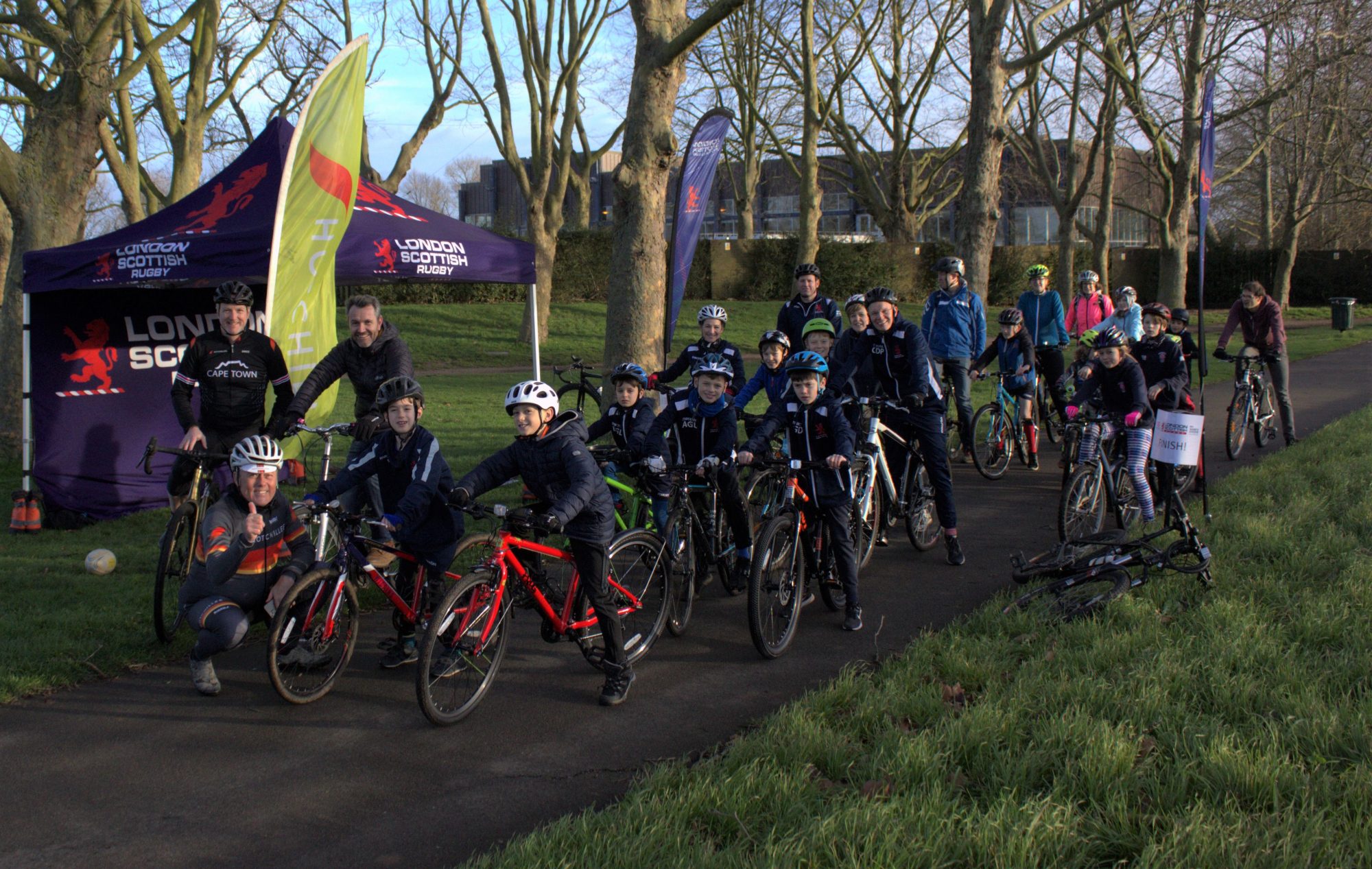 There are still places available on the forthcoming London Scottish Multi-Sport Camp. Book NOW to avoid missing out!

The camp will run here at the Athletic Ground from Monday 17th February – Thursday 20th February. Open to those aged 6-16 and all abilities welcome.

When our head coach, John, sent his thoughts about the weekend’s minis festival at London Welsh, even the greeting had an exclamation mark!

“We look like a real rugby team” he boomed. “Everyone did the London Scottish jersey proud.”

Then… and you may want to sit for this… he used a #hashtag.

So, in order to do our weekly report justice, we’re not using any punchy puns or slick turns of phrase. We’re not going to maul John’s words. (Okay, maybe just one rugby pun). We’re going to let our coach tell it:

“There was loads of energy and our squads played for all they’re worth for a good 90 minutes, each managing to play five games. Some great rugby was on show and we competed strongly against both Welsh and Irish.

All our players demonstrated fantastic skills in every part of their game, including passing, tagging, running support lines, working with their teammates and selling the opposition outrageous dummies.

“It was really great to see the squads (only selected on the day) come together as teams over the course of the tournament. We got better and better with each game, all of our players showing great commitment and willingness to listen to coaching. Coaches from every club commented on how great it was to see the games played in a constructive and sporting manner. We look like a real rugby team. No medals and trophies this week but everyone did the London Scottish jersey proud #OneClub.”

Well done everyone. What a successful and enjoyable day out. We had a strong turn out as usual. The weather was on our side. And we can’t wait to see you all at our next training session.

It was a sunny but windy morning as the whistle blew for the start of the match with a Welsh kick off.

Possession passed from team to team, with a rip from Scottish forward Oli and some strong tackles by Josef and Owen. The Welsh were forced into touch, giving Scottish a free pass which was quickly shipped to Axel with some excellent support by Ben M. Axel then executed a skilled offload to Jackson who ran the 30m stretch to the try line for the first try of the match at 8 mins in.

It wasn’t long before the next Scottish try, with Ben G running over half the pitch through numerous Welsh defenders to score just two minutes after the restart.

The next few minutes involved strong tackles and rucking from both sides, especially from Scottish players Alfie, Kyle and George, as well as some well-placed pop passes from Axel and Josh when in possession. However, a Welsh free pass lead to Scottish defending their try line before Welsh broke through to score their first try of the match.

Scottish responded with another two tries in the next 5 minutes, through the hands of George and Axel, to take the score to 4-1 at half time.

After a drink of water and a regroup, the boys were back on the pitch. There was some strong Scottish defence including dominant tackles from Ben M on the wing and forwards Woody and Oli, but Welsh pushed through to score the first try of the second half.

Welsh soon returned to the Scottish try line, but the quick defence forced a knock on for a Scottish scrum on their 5m line. After a few minutes of intense contest Welsh scored their 3rd try and soon followed it with another to close the gap on the scoreboard and bring it to an even 4-4.

Scottish rallied quickly though and forced two penalties from Welsh. They kept up the momentum and got the ball to Owen who made an excellent run through numerous tackles to put Scottish ahead with another try.

After the restart there were some big tackles from us, but a Welsh kick put the ball in the Scottish 22 and allowed Welsh to catch up once again with another try.

Scottish soon returned with another try, with full back Josef making a strong sprint after a Scottish scrum on the halfway line.

However Welsh followed suit after 5 minutes and evened up the score to 6-6, despite some well-placed kicking from Josef and Axel.

The next few minutes saw strong competition from both sides as they fought to score the next try and take the lead as the game drew to an end. A Scottish rip and an excellent run from Alec on the wing saw them gain some ground, but Welsh returned with strong runs to gain the try.

With just a minute left on the clock both sides tussled in the middle of the pitch for possession, before a Welsh breakaway took the ball into our 22 again. However the speed of the Scottish defence was such that they slowed down the Welsh momentum and were able to hold up Welsh’s attempt at a final try.

Hopes at an equalising try were dashed as the final whistle blew, but all in all it was still a very strong performance from the Scottish team, with many great things to take forward into our match against Hackney Bulls next weekend. Our player of the match was George, for his constant effort and excellent tackles, runs and support in many tries.

The U18 girls team travelled down to Trojans in Southampton on Sunday for a friendly. With a flurry of late withdrawals due to illness, only 14 players were able to take the field against a full-strength Trojans team and the absences meant several players fulfilling unfamiliar roles.

Nevertheless, great teamwork, maintaining structure and retaining the ball well allowed sustained pressure by Scottish to achieve a try under the posts by Lottie after about 15 minutes, converted by Becca for a 7-0 lead. More of the same meant Scottish spending sustained time in the Trojans half and after good work out wide Jess was frustrated to be held up. But more work and phase play a little later resulted in a try for Beth which went unconverted.

The first half ended 12-0 to Scottish, good reward for their commitment to each other.

It wasn’t any shock that Trojans came back strongly in the second half and it wasn’t too long before they managed to work some phases and get across the line to bring the score back to 12-5. Great credit though that the response from Scottish was equally swift, retaining the ball in the Trojans half and working a try by Kira out wide. A lovely conversion by Becca in windy conditions stretched the score back out to 19-5.

By now, having played three quarters of the match a player down it was always likely that Scottish would tire and have their defence stretched and so it proved. A short time later Trojans managed their second score, 19-10.

Inside the final 10 minutes and things started to unravel some more losing one player to injury and another to a team yellow card, we were now fielding 12 against 15. With time slowly running down, the defence creaked and a third unconverted try was scored by Trojans leaving the score 19-15 with minutes left. Some tense moments followed with all the pressure from Trojans but our defence just about clung on to secure the win.

All credit to the teamwork and commitment of the players on the pitch for the perseverance to hold out for the result in difficult circumstances. Some good experience too for those getting game time out of their more usual positions – always good development.

It was a busy week for everyone involved with the Lions last week, with both the first and seconds having important matches at the weekend it was imperative for a good week to prepare.  2 good training session in the week proved incredibly beneficial for coaches David Box and Fraser Lyle to put structures into practice before implementing them on match day.

On Saturday, The Lions 1st XV had an away fixture against Thamesians.  After putting a big score against them earlier in the season the team went up full of confidence and hoping to start a big push towards the end of the season.  The training throughout the week clearly paid off the Lions ran out winners with the final score being 26-75.

See below for the seconds match report who had a tough game against a well drilled Hackney 2nds team:

Starting with a man down – the Lions looked more than capable of holding their own while the two teams sized each other up. This was short-lived – when, in the 8th minute, the Hackney no.9 made a darting run, breaking through the Lions defence.

14 minutes in, and a second try for the opposition, this time the conversion was just wide of the mark.

Three minutes later, the Lions retaliated with a well-fought drive – and a try from Rashaun Nero.

The Lions went on to hold Hackney inside their 20 for a good 15 mins, but struggled to execute a try.

Finally, in the 36th minute, The Lions broke through the Hackney defence with a try from Jerry Maui Talampas. A well-placed conversion from Montgomery saw the score tied at 12 points apiece.

A lapse in concentration by the Lions resulted in a last-minute try by the opposition – ending the first half 19-12.

Following the break, the opposition came out fighting hard with a couple of converted tries in quick succession, giving them a strong lead of 12-33 early in the second half.

After playing for 60 minutes The Lions were able to field 15 men, this gave the Lions some much-needed momentum and by executing quick breakdown ball and backline speed, were able to put Luca Vettori over the line in the corner in the 64th minute.

The opposition responded in kind through clever use of the wind to gain territory and strong running to break down the Lions defence, scoring four unanswered converted tries in quick succession. This put Hackney into an unassailable lead of 17-61 going into the final minutes of the game.

However, it was the Lions that had the final say of the match – Bofenda scoring a well-worked try in the corner in the dying seconds of the game. The match ended with the final score 22-61.

Next week sees a rest week for both teams allowing them to rest and recuperate before a big week the following week with the firsts playing league leaders St Albans at the RAG.  As always, your support is always welcome, and it would be great for you to come and support the boys in a massive match for them.