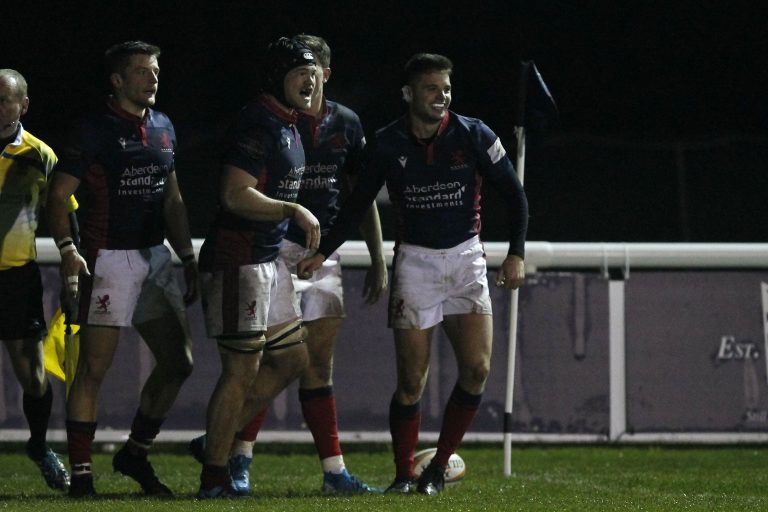 London Scottish came out on top 25-24 in a tight encounter at the Athletic Ground against Cornish Pirates in Round 6 of the Greene King IPA Championship.

The Scots try scorers included Matt Gordon, captain Lewis Wynne and Bobby Beattie who went over to score his first in a Scottish shirt. Will Magie slotted two conversions and two penalties.

Playing under the floodlights on a wet, windy and chilly autumn evening, it was the visitors who kicked off proceedings through the boot of Rojas Alvarez; the Scots playing from left to right in the first half.

Both sides gave away early penalties. Pirates took the chance to point to the posts first though, after the Scots were penalised for being offside. Alvarez Rojas landed a kick from the middle of the field 25 metres out; London Scottish 0-3 Cornish Pirates.

Magie’s restarting kick landed deep in the visitors’ 22. The Exiles put their opponents under a lot of pressure and were rewarded with turn over ball when Matt Eliet pounced on a loose ball on the Pirates’ 22 metre line.

Scrum-half Josh Barton then barked out instructions to his forwards, the ball went to Phil Cringle then to Magie, who put in a lovely long looping pass to Beattie who then kicked in behind the Pirates’ defence. The visitors were unable to secure the ball, which ended up going over their try line. Gordon tapped the ball down to score the first try of the evening. Magie landed the extras; London Scottish 7-3 Cornish Pirates.

Despite kicking the ball out on the full at the restart, it was the Pirates who came away with a penalty at the scrum after a scuffle between the two sides. They were unable to capitalise on good territory though. Rob Stevenson ripped the ball from Alvarez Rojas on the halfway line, and Pirates were then penalised for obstruction. Magie’s kick brought the Scots to 22 metres out.

Off the back of the line out the Scots set up the rolling maul. Playing the advantage, Barton passed the ball out to the backs; Gordon offloaded to Magie, who threw a pass between his legs to Stevenson. He swiftly offloaded the ball to full back Joe Luca Smith, who made a break down the middle of the field to bring the Scots to five metres out from the Pirates’ try line. The ball was then taken to ground by Barton, captain Wynne picking up from the base of the ruck to dive over and score. Magie slotted a straightforward conversion; London Scottish 14-3 Cornish Pirates.

With less than 20 minutes to go to half time, Pirates set up a rolling maul in the middle of the field seven metres out from the Scots try line. The ball went out left to the backs – the Scots short of defenders on the open side- and Patterson went through a gap to score. Alvarez Rojas pushed the ball wide of the right post; London Scottish 14-8 Cornish Pirates.

The Scots went down to 14 men after Luke Frost was shown a yellow card for bringing down a maul illegally seven metres out. Alvarez Rojas slotted a penalty right in front of the posts with ten minutes to go until half time. London Scottish 14-11 Cornish Pirates.

Despite being a man down the Scots gave away no more points before half time. They headed into the changing rooms with a three-point lead 14-11.

Magie kicked the Scots back underway for the second half and soon after was lining up a kick at goal a few metres past the 10-metre line, Pirates penalised for being offside.  London Scottish 17-11 Cornish Pirates.

Pirates second try came after Mark Bright was penalised for pulling scrum half Jean-Batipst Bruzulier into a ruck on the Scots 10 metre line right in front of the grandstand. Pirates then set up a line out five metres out. The forwards went through the phases and the ball finally found Patterson, who once again spotted a gap in the Scots’ defence to go over and score. Alvarez Rojas kicked the extras to give his side the lead for the first time; London Scottish 17-18 Cornish Pirates.

The Scots went down to 14 men again with 20 minutes remaining, hooker James Malcolm sin binned for being off his feet at the ruck five metres out from the Scots’ try line. Pirates pointed to the posts, Alvarez Rojas on kicking duties once again, London Scottish 17-21 Cornish Pirates.

Both sides then shared penalties. The visitors gave away the first, scrum half Bruzulier offside at a scrum between the 10 and 22 metre lines right in the middle of the field off the back of a Scottish scrum. Magie’s kick went over to bring the Scots to within one point of Pirates 20-21.

The Pirates penalty came after the Scots were penalised for collapsing a scrum 22 metres out in the middle of the field. Alvarez Rojas stretched his side’s lead to four points 20-24.

With five minutes left on the clock, the Scots found themselves camped just short of their opponents’ 22 metre line. Fly-half Magie put in a lovely crossfield kick and Joe Luca Smith was up quickly to put his opposite number AJ Cant under pressure, Cant was unable to gather a bouncing ball in the far right hand corner of the field. The bounce fell kindly for Beattie though, who went over to score his first try in a Scottish shirt.

Magie missed the conversion, but the Scots had done enough to secure a memorable victory over Pirates, who before the match were sitting second in the Championship table.

On his try Beattie said: “It’s always nice getting on the score sheet, but it was down to the hard work of the boys and I was just in the right place at the right time. My mum was down to watch, which meant a lot as she can’t get to a lot of games. She chose a great match to come to.”

The Scots hold an impressive winning record over the Pirates at home: “They’ve not won at the RAG for quite a few years, so I think the boys are pretty chuffed to keep that record going. We knew it was going to be a massive game and we just threw everything at it.”

The team now has a week off before returning to Cup fixture on Saturday 30th November away to Yorkshire Carnegie.