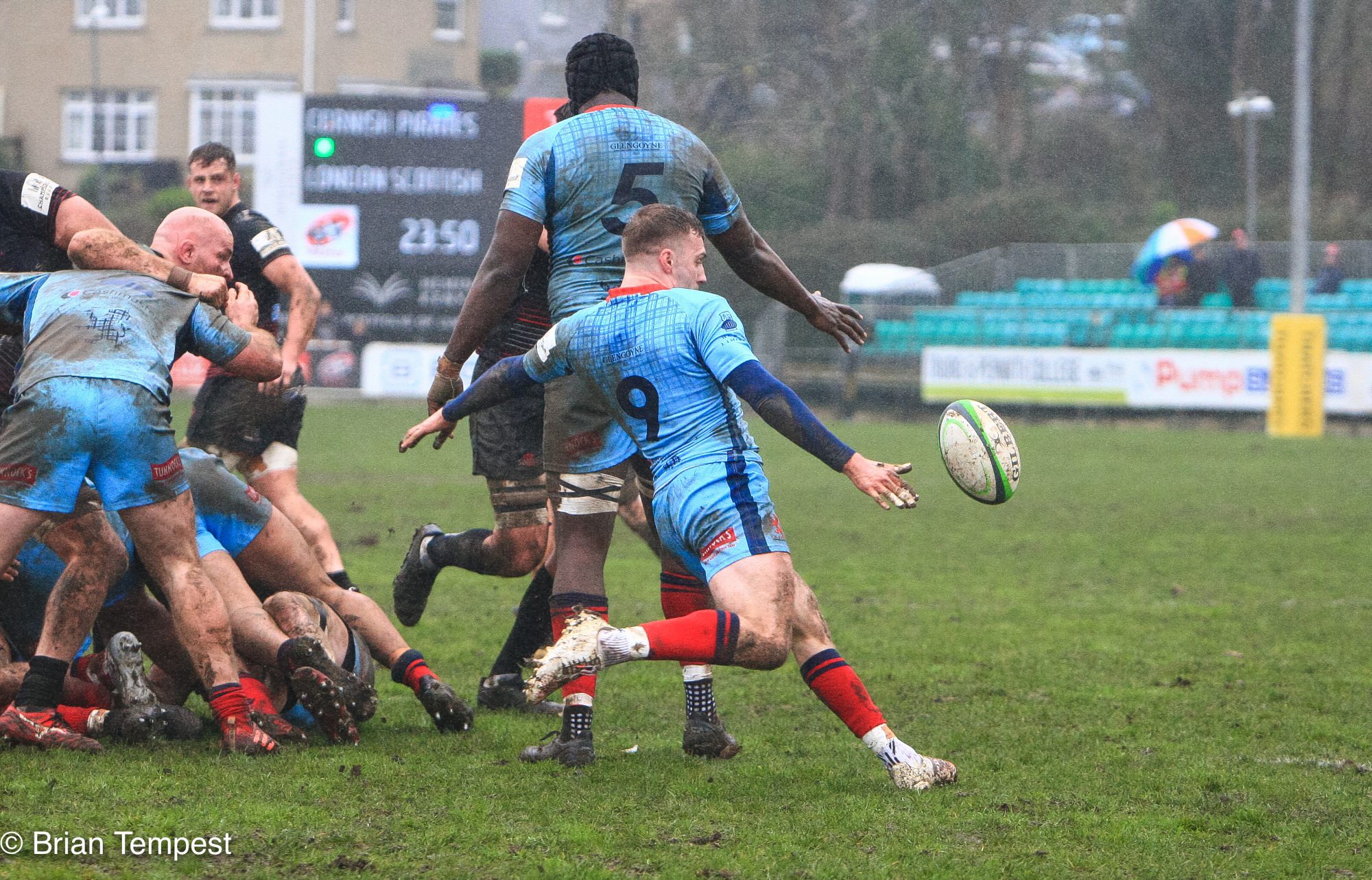 Three first half tries were enough for Cornish to close out a 19-0 win, as they executed their limited chances well amid the woeful weather.

Heavy wind and rain down in Penzance meant that it was always going to be a game for the purists and this showed from the opening exchanges. Handling was always tough and throughout the game the ball often appeared to resemble a bar of soap such was the ability of both sides to hold onto it.

Ironically, one of the Exiles’s best attacks came just 3 minutes in, as Quins loanee Paul Lasike bust through a gap and was able to find Cameron Anderson who in turn put Noah Ferdinand away down the left wing. Sadly when the winger was pulled down, he found himself isolated and the ball was turned over.

The first score for the hosts came just five minutes after this attack. Scottish were forced into a goal line drop out and as the ball was kicked long, it held up in the wind. Fullback Carwyn Penny ran it back hard and managed to beat the first man, before finding Callum Sirker who managed to score in the corner. Extras were added by Arwel Robson making the score 7-0.

Despite the strong start, the Exiles didn’t overreact and fought their way back into the game. They were aware of the strong wind against them and so started to run the ball out from their own 22 and managed to get rewarded for their courage.

This in turn forced penalties as the Pirates panicked and it allowed Scottish to kick to the corner on the 20 minute mark. A strong lineout turned into an even better carry for Cameron King, who came up just inches short of the line. The ball got trapped in the ruck, so everyone expected a scrum to the visitors, but the referee judged it to be a maul and so the hosts got the put in and were able to clear.

Pirates slowly worked their way down the pitch, before eventually they had a lineout 5m out and given their forward dominance, they were able to maul over and take their lead to 12 points, after the conversion missed off the uprights.

Five minutes later mark, Scottish looked to launch an attack on halfway. Sadly one wayward pass saw the ball hit the deck and Alex O’Meara hacked through and was judged to have dotted the ball down cleanly over the line, despite it bobbling up as he did so. The five minute blitz in the final quarter of the half was enough to see Cornish Pirates lead 19-0 at half time.

The second 40 was something of a rugby fan’s collectors item, as it was scoreless. Despite this, there were many close moments which had the conditions been better, Scottish would have probably converted. On the 46th minute, the Exiles were camped on the Cornish line slowly making inroads until they went for one too many pick-and-goes and coughed up a penalty.

Then just several minutes later, Lasike appeared to have scored on his Scottish debut, after the two Cams (Anderson and King) had linked up well. The USA international was then given the ball 10m out and despite being tackled, he looked like he managed to reach out and dot it down cleanly. However the referee disagreed and awarded a knock on to Pirates.

From there the game became a very stop-start affair, as both sides went in search of their respective bonus points. Pirates attacked well in parts while the Exiles kicked superbly to gain territory, but neither side was able to make it over the whitewash.

It was a game full of errors from both teams, but given the conditions that is hardly surprising. Everyone will be hoping that Nottingham’s visit to the RAG next weekend is greeted by sunshine rather than rain clouds. Lead sponsors Tunnocks are sponsoring the hospitality for the game and will be bringing along extra treats for everyone at the pre-match lunch so this is not one to miss! Hospitality and Tickets can be bought here.