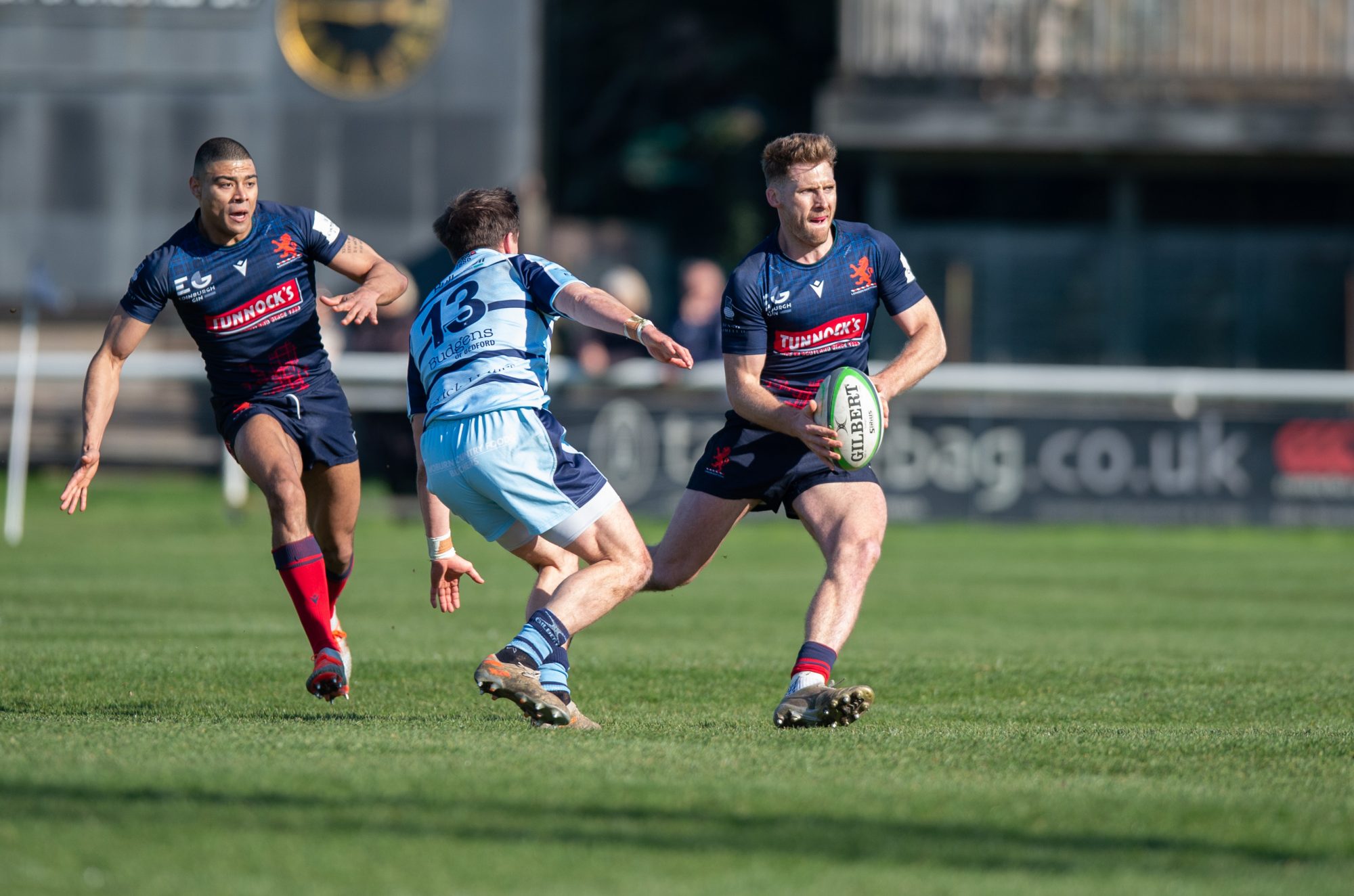 After being in the lead at the interval, Bedford Blues’s second half blitz ultimately proved too much as they ran out 21-62 winners at the Athletic Ground.

As the old sports cliché goes, it was a game of two halves. London Scottish’s opening forty minutes against Bedford Blues was an inspired performance, with fast free-flowing rugby playing to the conditions on a sunny afternoon at the RAG.

Three tries and three expertly slotted conversions from Dan Nutton, put the Exiles into a strong 21-17 lead at half time. Yet ultimately, Bedford proved to be too strong on the day, with a second half performance that saw them run in seven unanswered tries.

The afternoon’s action started with full back Cameron Anderson scoring a stunning solo try after just three minutes of play. Running in from the 22m, Anderson sold the dummy to the Bedford defender, which saw a space open up in the line. Anderson pinned his ears back and sprinted in for the Exiles’ lead.

Bedford responded with two tries, which saw them take a 12-7 lead. The first saw centre James Little take a quick tap penalty, and find a gap in a backtracking Exiles defence. Little was able to maneauver his way through, and cross over to score. Fly half Will Maisey converted from the tee to equalise.

Prop Joey Conway was fastest to react to a spilt ball near the Exiles try line. He dived over for the away side to take the lead. Scottish responded quickly, through their own tap penalty which saw none other than captain Brian Tuilagi cross. Running on from pace, Tuilagi crashed through the Blues defenders to cross the whitewash. London Scottish Player of the Match Dan Nutton regained the Exiles lead, with his conversion on the half hour mark.

The match continued to yo-yo, with neither side able to firmly grasp the momentum in the first half. Bedford’s Alex Day made a break from another tap penalty, and worked the ball wide through Jamie Elliot,  who then offloaded to Dean Adamson, who crossed for his first of the afternoon.

The first half’s final play saw Scottish go ahead through flanker Morgan Dawes. In similar style to his captain, Dawes crossed over with a close range drive, with Nutton’s conversion, establishing a 21-17 lead, as the sides split for the break.

Many positives can be taken from Scottish’s first half performance, which was recognised by Attack Coach Ricky Khan: “When we’ve been good we’ve been brilliant, but when we’ve made mistakes we’ve gotten punished for it. We’ve shown what we can do, we just need to try and put that over a whole 80 minutes, as opposed to 40.”

The Bedford scorers in the second half began with Number Eight Ollie Stedman, who picked and went over from the back of a scrum. Full Back Matt Worley showcased his pace down the wing for his try, as did Jamie Elliot, who scored following that.

Replacement prop Josh Pieterse drove over from close range, and Dean Adamson’s impressive second half quadruple took the game away from Scottish. The second 40 minutes was a struggle for the Exiles in the final match of the Championship season. Despite the results this year, all the Scottish players played for each other and the fans and showed true comradery, in what really is a testament to them, with many of them having only met this campaign.