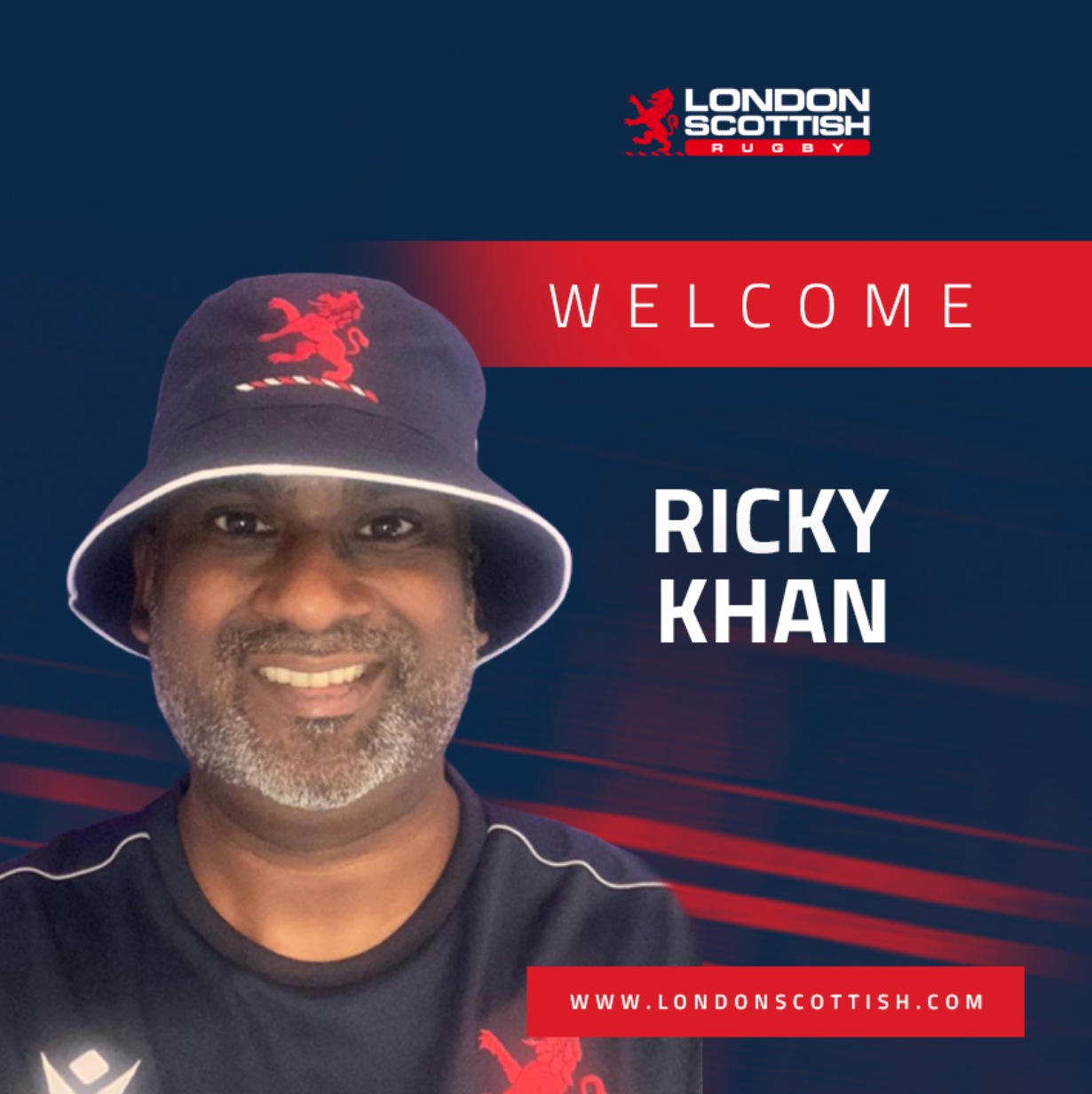 London Scottish are delighted to announce the addition of the inimitable Ricky Khan to the coaching team for the upcoming season. Shaka is the only BAME coach in the Championship and a proud Lancastrian whose heritage is originally Guyanese with a Scottish great great grandfather Menzies!

“I met Stevie last season when we played Scottish in a pre-season friendly. I’m looking forward to learning from someone with his experience, but also sharing with him the knowledge and experience I have built up in my 20 years of coaching rugby.

“In the past two seasons my backlines have had the top try scorers in National One and I know my success will complement Stevie’s coaching skills and deliver winning results for the Club.”

Khan has had the pleasure of being an instrumental part of the journey of many players who have gone on to play in the Championship, Premiership, and internationally; an achievement of which he is ‘hugely proud’.

His longest coaching post was as an academy coach for Wasps for 13 years and he has been backs coach at Chinnor for the past six seasons; he is also the assistant coach to the Jamaican 7s side.

“I’ve coached them (Jamaica) for a year now. I work with head coach Steve Lewis, a Scotsman based in New York, and I’m also the head coach for the UK based Jamaica Crocs side. Many of the players from the Crocs side go on to be selected for the National Team,” said Khan.

Last year Khan worked at the HSBC 7s tournament in Hong Kong and at the Rugby Americas North Olympic Qualifier in the Cayman Islands. “We finished runners up behind Canada, so didn’t qualify automatically for the Tokyo Olympics. However, we were qualifiers for the Olympic repechage tournament which has been postponed due to the Covid-19 outbreak.”

Before becoming a coach, Khan was a rugby player. He first started playing for his local side in Lancashire, Blackburn RUFC, and has played both codes of the game.

He joined the Richmond FC Academy from Brunel University’s Borough Road College when our local rivals were playing alongside us in the Premiership during the 1998/99 season.

“I was there when both clubs were sadly forced into administration and so I ended up playing some First XV games in the “interim season” before the clubs were demoted to level nine” commented Khan.

Having picked up a bad injury with Preston Grasshoppers in the National Leagues, Khan turned to coaching and was fortunate enough to get the coaching role with London Wasps.

“I have lots of things I really enjoy about coaching. As I was no longer able to play rugby, I made the decision to really focus on being the best coach I could. I love what being part of the team is all about and seeing when you have implemented tactics successfully or helped a player to achieve their goals either on or off the pitch.”

Director of Rugby, Matt Williams, added: “Shaka is one of the undisputable leading characters in rugby and has been my wingman for a long time now. He understands me better than most and we have developed a flawless way of working together. Everybody who knows me well will have always assumed Shaka being my first signing!! He is also brilliant at pastoral care and will continue his joint role of coaching as well as working as part of my off-field management team with Doug and Liam.”

“James Tyas, Ed Hoadley, and Luke Hibberd, who I’ve worked closely within my previous role, said that Scottish would be a great appointment for me professionally and as the supporters are as passionate about the game as I am, we will get on brilliantly.

“Having worked alongside them in my three years at Richmond, I know how proud Scottish are of their culture and heritage, but also I am impressed with how they have progressed their Exile philosophy to become a truly diverse and inclusive Club where all are welcome regardless of ethnicity, religion, social demographic, geography, and sexuality.

To find out more about Khan, click here to watch an interview between him and London Scottish board member and LGBT champion Josh Brekenfeld. Please enter the password: 3W^&8rH3

Here are two fun-facts about our new backs coach

“It’s a hybrid between my 2 life heroes; music artist Chaka Khan, the female singer from the 70’s, and the Zulu King Shaka Zulu!

“I also was in the English Schools Ski Squad as a youngster which, together with the Jamaican connections, leads to jokes inevitably about “Cool Runnings’ or more aptly “Cool Ruckings”.