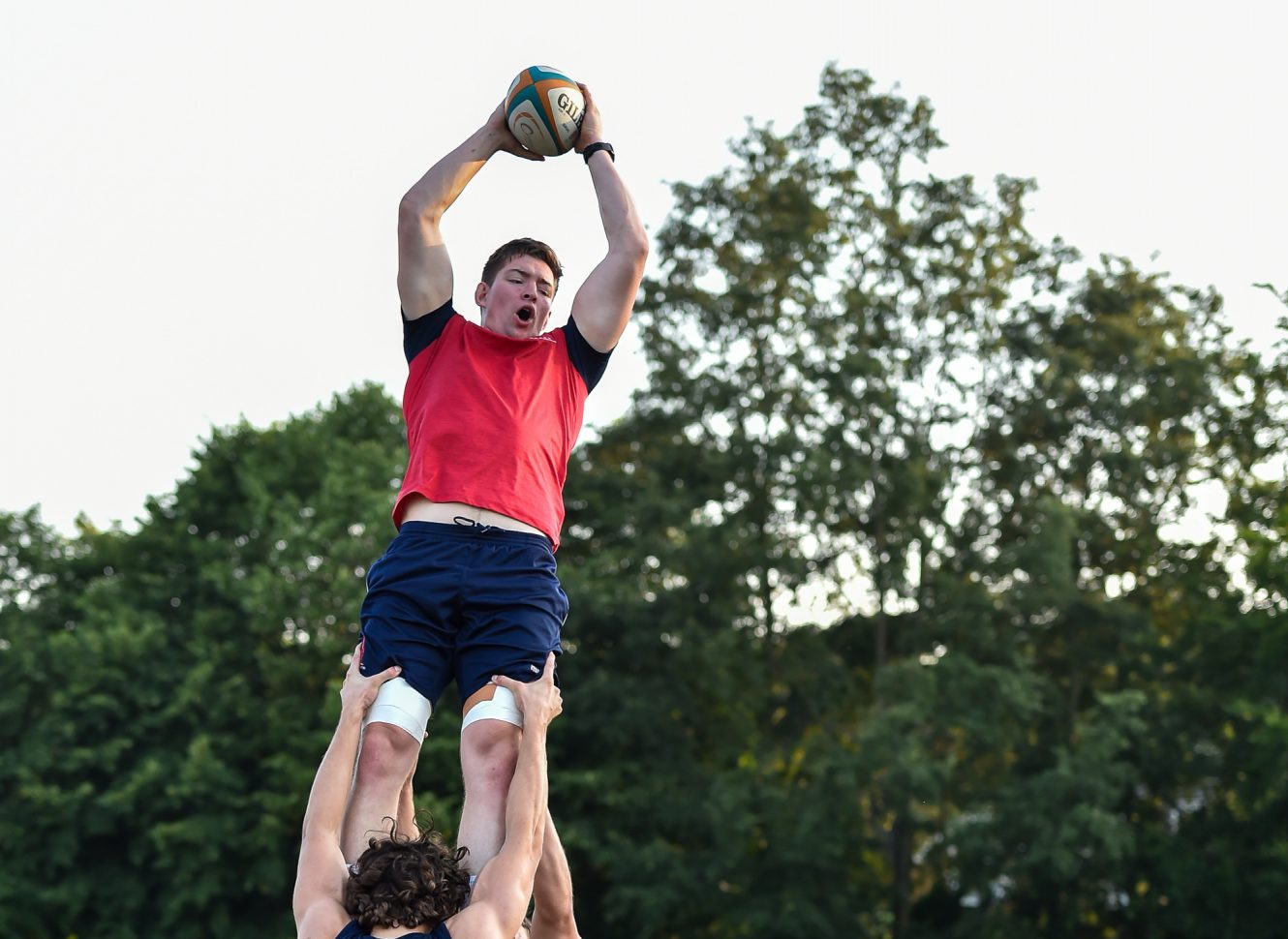 As the start of the season draws ever closer, Director of Rugby Matt Williams is pleased to announce the next set of players who will representing London Scottish for the 2021/22 campaign.

Originally a back row, Ehize came through the Wasps academy, representing them at U18 and A-league level, as well as playing for them in the Anglo-Welsh Cup.

In 2017 he moved to the Bristol Bears academy before playing at Dings Crusaders and gaining Championship experience at Hartpury.

He then moved down to National One side Chinnor where he met our current Director of Rugby Matt. Impressed by what he saw, Matt has now brought Ehize to the club ahead of the 2021/22 season.

Born in Milan, Edoardo didn’t start playing rugby until he was 14 at Italian side Cus Milano Rugby. He took the sport up quickly and soon made it into the Italian National Academy until he reached U18s.

He then left Italy and moved to Cardiff to study, where he won 72 first team caps while at Cardiff Met including the BUCS Super Rugby Final in 2018.

After finishing his three year course he moved to the University of Bath in 2019 to complete a master’s degree in International Management. For the 2020/21 season he was with National One side Old Elthamians.

Edoardo is predominately a second row but can also cover the back row and he has played for Harlequins A against Exeter Chiefs.

Angus is an dynamic second row who is also comfortable slotting in at flanker if required.

He joins us this season from fellow Championship rivals Hartpury College after a successful couple of seasons in the West Country while he completed his University studies.

In that time he was a key part of the squad that won two BUCS Super Rugby titles (including beating Edoardo’s Cardiff Met in 2018!).

Angus previously spent three years at Lydney RFC before playing at Hartpury and is looking forward to learning from other squad members and showing what he can do this season.

A versatile player who can play across the back row as well as lock, Tyas is one of the more experienced players at the Club and a firm fan favourite.

This is his second stint in the famous jersey having rejoined the Clan from National One side Chinnor, having played there under current Director of Rugby Matt Williams.

Much travelled Tyas has played over 100 Championship matches for Cornish Pirates, Plymouth Albion, Moseley, Rotherham Titans and London Scottish. He came through the Bath academy before making his debut for their first team, and also spent time with Worcester Warriors.

Tyas is Scottish qualified and has featured for Scotland at Under 17, 18 and 20 level, playing alongside former London Scots Jamie Stevenson and David Cherry.

A player from one of the most famous families in World Rugby would be excused for having a bit of an ego, however this is not the case with Brian.

Born in Samoa, the back row joined us last summer from Italian Top12 side Mogliano having previously spent time at French side US Dax.

He came through the Leicester Tigers Academy before moving to Newcastle Falcons and then Saracens.

He is always drives standards in training and is agile, on top of having the tackle and ball carrying skills of his father (Freddie Tuilagi) and uncle (Manu Tuilagi).

Morgs came to London Scottish this year having previously played at National One side Birmingham Moseley.

The openside, who was known for his high work rate and infectious personality while playing in the Midlands, has now made the move to London as he prepares to make the step up to Championship rugby.

Before playing at Moseley, Morgan was at fellow Birmingham outfit Broadstreet. He joined the club aged just 21 and was captain within three months such was the impact he had on the side.

In 2018, Morgs also played for a non cap Jamaican 7s side at the Bournmouth 7s.

Born in High Wycombe, Jack is incredibly well travelled and joined London Scottish ahead of the 2018/19 season after coming through the Club’s Professional Entry Programme.

Despite still only relatively young, he has a wealth of experience having played at and attended Wellington College in New Zealand before spending time with the Crusaders Academy and with Christchurch.

When he then returned home to England, Jack played at fellow Exiles London Irish before finding his home with us at London Scottish.

Tom is an experienced back row player who is comfortable in all three positions however is predominately a number eight.

He makes the move this season across London to join us having spent the last six years at National One side Blackheath.

He went on the England Counties tour to Spain in 2017 where he started both matches that summer including a win over the National team.

Before time at Blackheath, Tom came through the Bath Rugby Academy and was there for two seasons. In his second year with the blue, black and white he impressed while on loan at Rosslyn Park and was signed with Wasps for two years before then making the move to Blackheath.

Cam joins London Scottish this season having spent the last three years at Cardiff Metropolitan University while he completed his degree in Sports Management.

In his first year at the Welsh Uni, he was a key part of the squad that won the Youth National Cup in 2018/19 and received Man of the Match in the final which was played at the Principality Stadium. It was even more special for the university as it was the first time in their history that they has won the competition.

During his second year Cardiff Met were near the top of the Welsh Championship and were into the latter stages of the BUCS Super Rugby competition, however things came to an abrupt end due to the covid pandemic.

The number eight took up rugby as a junior at Beaconsfield RFC before moving to St. Edwards, Oxford School aged 13. While there he was played for the Wasps Academy until he left for uni and was part of an England Counties U18 side that beat Ireland 2-0 during a two match series in Portsmouth.

When speaking about the players packing down in the scrum, Director of Rugby Matt Williams said: “The back five of the scrum is all about balance and with this crop of players I think we strike it perfectly. We have a great mix of work horses and ball carriers, lineout operators and breakdown specialists, some experienced heads and exciting younger players.

“With Brian (Tuilagi) we have a player from one of the most iconic families in world rugby. Of course, he tackles incredibly hard and carries very well, but he is also very athletic, has a great work rate and is a senior voice within the squad who always leads by example.

“At openside we have Morgan Dawes and Jack Ingall. Morgs is a player I’ve really been looking forward to working with. He’s been on the opposing side to me many times over the years and he’s always stood out. He’s a larger-than-life character who plays the game on the edge; exciting on the pitch and willing to stick his head where it hurts and do the dirty work that no one else sees. Jack has been at Scottish for a while now and at only 23 years old brings a wealth of experience above his years. Jack is a different type of openside to Morgs, and brings a huge work rate with back-like skills. Jack loves the open, Morgs thrives in the tight and I’m excited to see them fight it out throughout the season!

“At Eight we have Tom Baldwin and Cameron King. Both players love a route one carry and Balders, like Morgs, has always stood out for me in National league rugby being the stalwart in Blackheath’s pack. He first came on the scene at the Bath Academy, then latterly Wasps and although predominately a number eight, he can cover both six and lock. Cam comes highly recommended in the BUCS system from his time at Cardiff Met and is definitely making an impact in training with his love for all things contact!

“In the engine room at lock we have Ehize Ehzode, Eduardo Bolocco, Angus Southon and the recently converted James Tyas! I’ve always enjoyed working with Tyas and this season his role will evolve as he’s now in a position to cover the row which will only bring further strengths and versatility to his game. Everybody knows he thrives off line outs and now he has even more of a chance!

“Angus, Ehize and Edoardo, give us strong lineout options as well as mobility around the park. I’ve worked with Ehize before at Chinnor, and he has Premiership experience with Bristol as well as many Championship games at Hartpury. Angus and Edoardo both come out the BUCS system and have always impressed me whenever I’ve watched them play respectively at Hartpury and University of Bath/Cardiff Met.”

Tickets for this weekend’s game against Ebbw Vale at our training base Maidenhead RFC are still on sale at just £5 for adults while U18s go FREE! Click here to buy your tickets.

London Scottish Memberships and Season Tickets are also still available. Club Memberships give you discounts on match day tickets, Club merchandise and 25% off at Gaucho and other local businesses. Season tickets (Saltire Stand or Tartan Terrace memberships) give you all these perks with the added bonus of getting you into every home game! For more information or to buy your 2021/22 London Scottish Membership, click here.