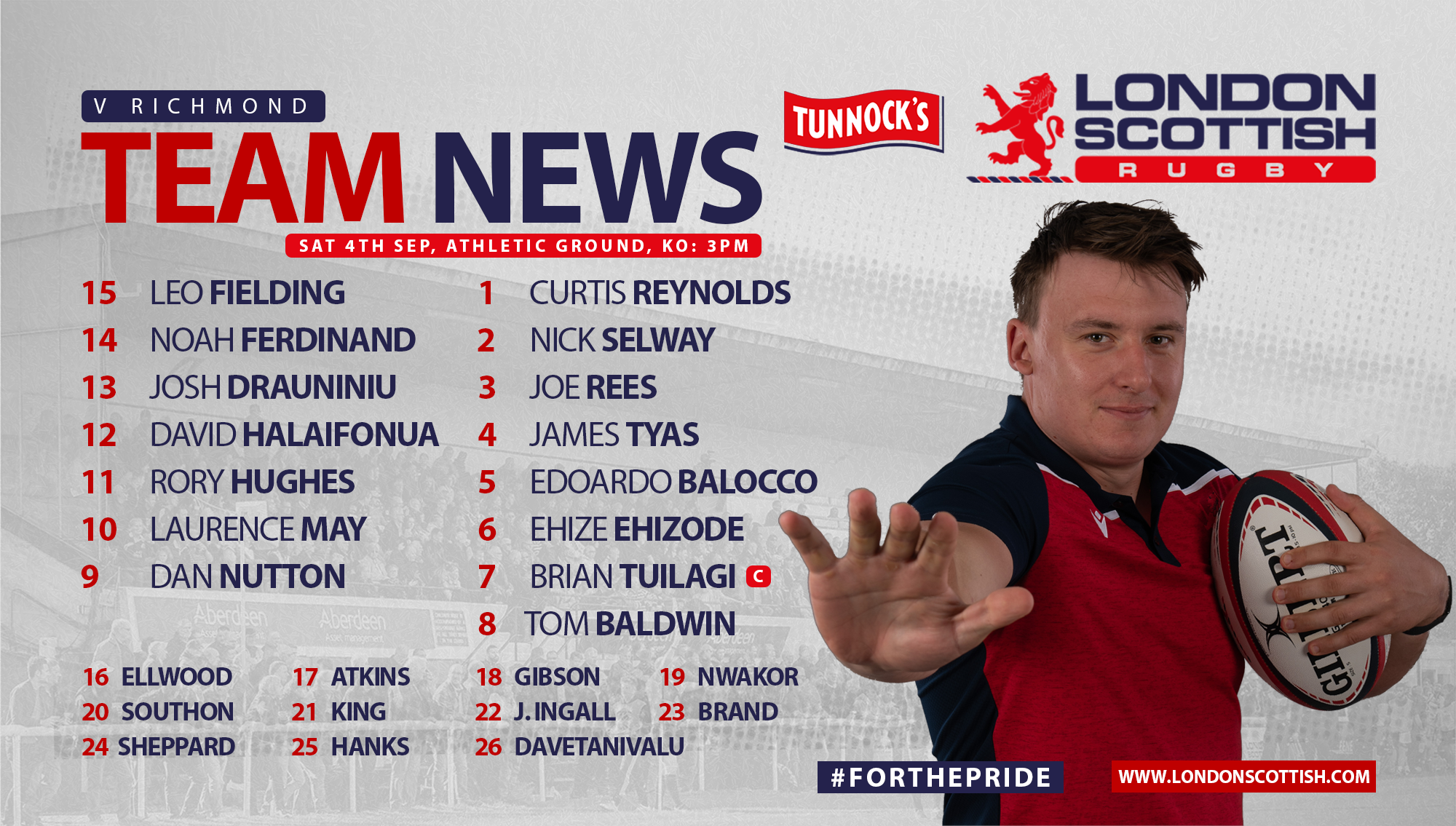 For the first time in 18 months, London Scottish finally return to the Athletics Ground tomorrow and what better opponents to face than fellow residents Richmond!

Director of Rugby Matt Williams has made seven changes to the starting team that beat Ebbw Vale a fortnight ago, with a whole host of players making their first appearance in a London Scottish shirt.

Brian Tuilagi will lead the side again as we look to make it two wins from our first two preseason games.

In the front row, Curtis Reynolds and Joe Rees come into start at prop, with Nick Selway staying at hooker. James Tyas and Eduardo Bolocco keep their places in the engine room after impressing a fortnight ago.

In the back row, Tuilagi moves across to openside with the versatile Ehize Ehizode coming onto the blindside and Tom Baldwin starting at eight.

Summer signing from Edinburgh Dan Nutton makes his first start at scrum half and will be joining Laurence May at halfback.

In the backline, internationals Rory Hughes and David Halaifonua continue to start on the left wing and at inside centre respectively. Halaifonua is joined in the midfield by former England 7s, Rouen and Worcester Warrior Josh Drauninui.

Noah Ferdinand remains on the right wing, while the exciting Leo Fielding comes in at fullback.

London Irish duel registered players Ben Atkins and Rory Brand are both among the replacements.

Ahead of the encounter, Matt Williams said: “Everyone is buzzing to see London Scottish returning to the Athletic Ground this weekend, and the fact it’s a derby against Richmond makes it all the more exciting!

“With just two weeks to go until we host Jersey Reds at the RAG in our season opener, and even though we’ll be in the wrong changing room on Saturday, this is a chance for boys to experience their home ground for the first time!

“We are a new squad and still learning so it’s important all 35 boys will be given game time spread over the next two weekends to stick their hand up for a starting place against Jersey.

“Richmond are a big step ahead of us in terms of preparation as we are still playing catch up having missed the last 18 months. The one thing I can guarantee you on Saturday, as we proved against Ebbw Vale, is that we will hit hard and play some attractive rugby! It will be an exciting match in front of our supporters.”

If you haven’t already got your tickets for tomorrow’s game, click here. Adults are just £10 while U16s are free.

If you can’t make it down tomorrow, be sure to come down for our first game of the Championship season as we host Jersey Reds. Grab your tickets for this one here.