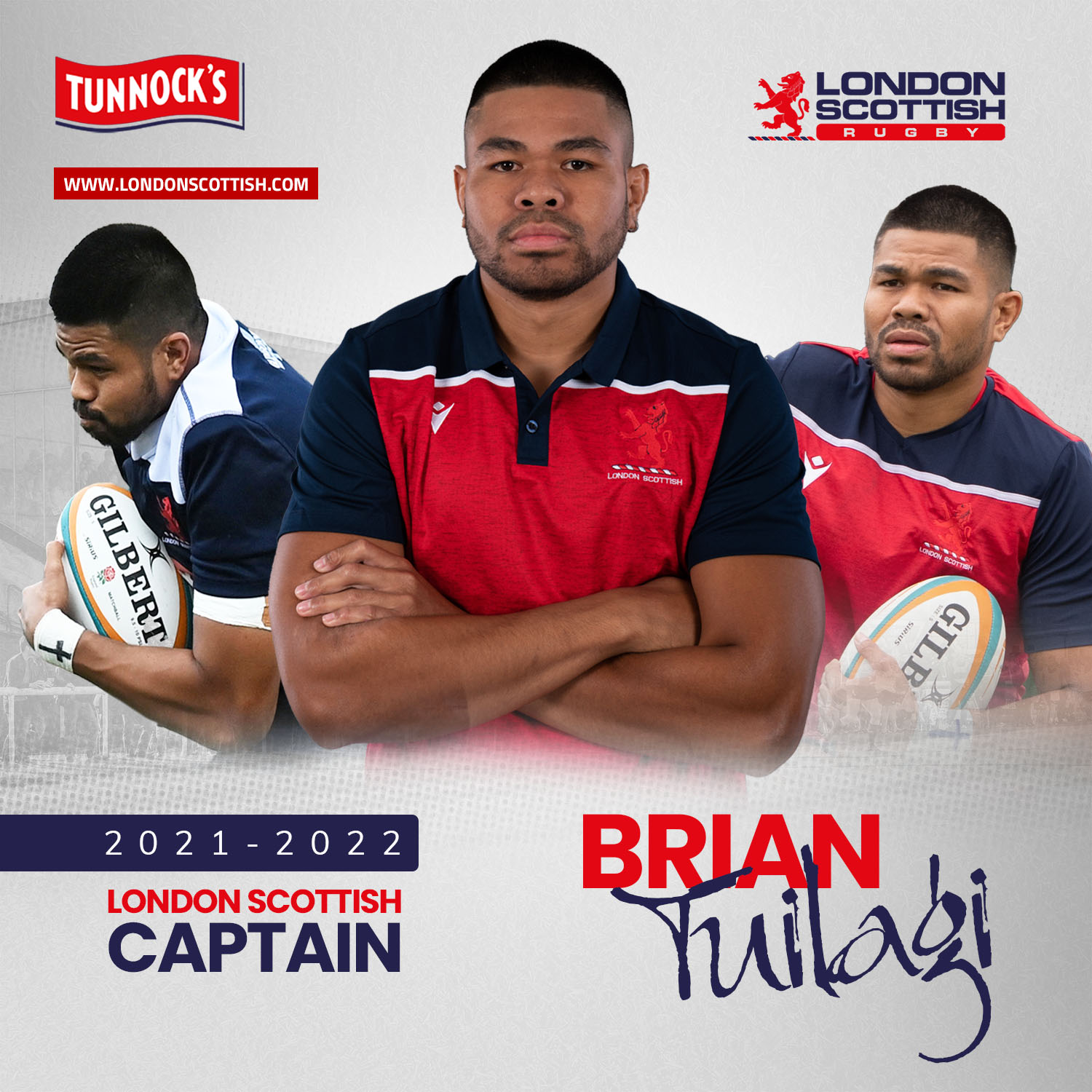 Brian Tuilagi has been named as London Scottish Club captain for the upcoming season.

Joining London Scottish last year from Mogliano in Italy’s Top12 league, Brian was due to represent the Clan in last year’s Championship campaign before the pandemic intervened.

Despite last weekend’s friendly against Nottingham only being his third appearance in a London Scottish jersey, Director of Rugby Matt Williams has been impressed by Brian’s attitude from the outset.

“I’m delighted to be able to announce Brian as captain for this season.” said Matt. “Ever since I started working with him last season he’s impressed me as a natural leader, putting him in good stead for this role.

“He gets on well with all the boys and, most importantly, has their respect. He doesn’t need to shout, but he leads by example and when he does speak, everyone makes sure they listen.

“His work rate is outstanding; he hits hard, is a menace on the floor and carries well which encompasses everything we represent this season.

“He’s impressed all of us coaches when he captained us during our three preseason games and so it felt only right to formally announce him ahead of our Championship opener this weekend.”

For Brian, captaining the Club this season is a huge honour.

“As always, and before anything, I’d firstly like to thank God for the good health and the opportunity of being able to play the game I love as well as the family and friends for their support.

“Already we’re a very tight-knit group and I’m always trying to lead through my actions. Every opportunity that I have to put on the jersey, I’ll always be aiming to lead by example.”

“To have been given the honour to captain any side is huge, but to captain this group of boys feels extra special. Already we’re a very tight-knit group and I’m always trying to lead through my actions. Every opportunity that I have to put on the jersey, I’ll always be aiming to lead by example.

“I don’t have much experience captaining at this level, or any level for that matter, but I’ve always tried to lead by example and there are a lot of senior boys who will guide me, and to be honest all the boys will be able to support me. Any leader in my opinion needs to be humble enough to take good advice from anyone.

“Although we’re the only side who didn’t play last season, we’ve got a really exciting squad and I think we’ve shown in preseason that we’re capable of playing at this level. The key thing for us is playing every game to win and having no fear about the result, as it will come if we turn up and play well as a team.

“London Scottish is a proud Club with rich history and passionate supporters. It’s exciting times here, building a new culture within the squad whilst carrying on the proud traditions the Club has and I can’t wait to give my all at leading the team this season.”

This weekend will see Brian’s first appearance as official Club captain as we welcome Jersey Reds to the Athletic Ground for our Championship opener. If you haven’t already, be sure to grab your tickets or hospitality packages via Eventbrite.